Samsung’s Lee to speed up management

Samsung’s Lee to speed up management 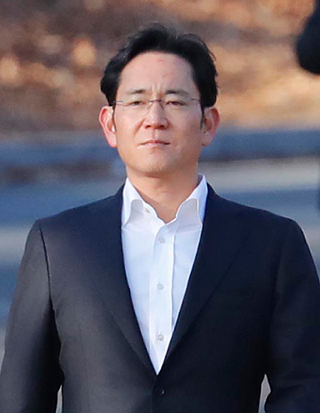 Samsung Electronics Vice Chairman Yoon Boo-keun told reporters Tuesday that the tech giant will “work harder” now that its leader Lee Jae-yong is out of jail.

Yoon was leaving a meeting at the Korea Chamber of Commerce and Industry building in central Seoul when he was asked to comment on Lee’s release from nearly a year in police custody on bribery charges.

“I have no words to say after Vice Chairman Lee and his lawyer already gave an official statement,” he said. “What we can do now is work harder for the sake of speedy management,” referring to a management philosophy pushed by Chairman Lee Kun-hee, Lee’s father.

Lee Jae-yong walked free on Monday after an appeals court reduced his five-year prison term to a suspended sentence. A lower court had convicted him of bribing former President Park Geun-hye.

Many Koreans decried the court’s reversal Monday as another example of preferential treatment for the country’s powerful conglomerates known as chaebols. Samsung is expected to come up with measures to enhance corporate transparency and expand its business sometime in March, a crucial month for Samsung.