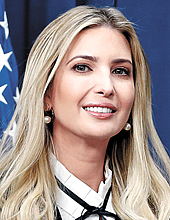 CNN reported Monday, citing White House officials, that Ivanka Trump will lead the U.S. presidential delegation for the closing ceremony of the Winter Games at the request of her father and the United States Olympic Committee.

Trump is expected to attend some sporting events the United States is competing in, according to the official.

Other members of the delegation to attend the closing ceremony in the PyeongChang Olympic Stadium on Feb. 25 are expected to be announced by the White House in the coming days.

It is not yet clear if Trump will be accompanied by her husband Jared Kushner.

In a phone conversation with President Moon Jae-in in early January, President Trump said he would send a high-level delegation, including members of his family, to the Olympics.

Later, the White House announced that Vice President Mike Pence would lead the U.S. presidential delegation to attend the opening ceremony this Friday.

“Korea and the United States are closely communicating on the U.S. delegates who will attend the closing ceremony of the PyeongChang Olympics,” said the South Korean Ministry of Foreign Affairs spokesman Noh Kyu-duk on Tuesday when asked to clarify how far along discussions were for Ivanka Trump’s visit.

“We believe that the United States will officially announce the U.S. delegation to attend the closing ceremony at the appropriate time.”

The 36-year-old businesswoman and television personality had been expected to accompany President Trump on a visit to Seoul last November as part of his first Asia tour, but plans fell through at the last moment. She attended the 2017 World Assembly for Women in Tokyo and flew back home immediately to help work on a tax bill, scrapping visits to Seoul and Beijing.

Ivanka Trump has worked with the International Olympic Committee and the city of Los Angeles to bring the Summer Olympics there in 2028. Her mother, Trump’s former wife Ivana, was a competitive skier from Czechoslovakia.

Pence departed for his Asia trip Tuesday, heading first to Japan. He will arrive in Seoul Wednesday.

Pence was expected to meet with a group of five North Korean defectors in Seoul ahead of attending the opening ceremony, according to various sources, in an apparent move to highlight North Korean human rights violations.

He was expected to invite a defector to attend the opening ceremony as a guest, according to one source.

The parents of the late Otto Warmbier, the American student who was jailed in North Korea and died last June after he was released in a vegetative state, will also attend the opening ceremony as guests of Pence.

“We’ll be telling the truth about North Korea at every stop,” Pence told reporters after touring missile defense facilities in Alaska Monday.

“Whatever cooperation that’s existing between North and South Korea today on Olympic teams does not cloud the reality of a regime that must continue to be isolated by the world community.”

Kim Yong-nam, president of the Presidium of the Supreme People’s Assembly, will lead North Korea’s high-level delegation to the Olympics.

Pence did not rule out the possibility of meeting with a North Korean official and said, “Let me say President Trump has said he always believes in talking, but I haven’t requested any meeting.”

He added, “We’ll see what happens.”