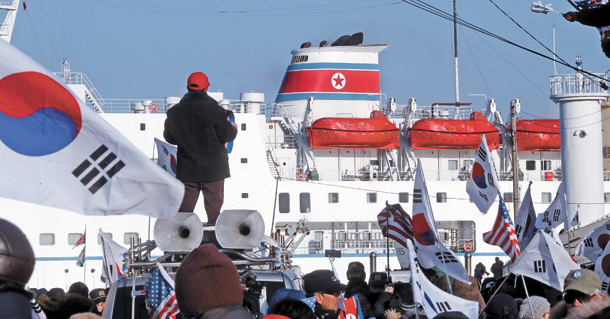 Members of North Korea’s Samjiyon Orchestra arrived at Mukho Port in Donghae, Gangwon, on Tuesday afternoon on a passenger ship after Seoul lifted unilateral sanctions banning any North Korean vessels from sailing in domestic waters. This is ahead of two planned concerts later this week in the South.

Some 120 members of the troupe, including instrumentalists, singers and dancers, were featured in North Korean media clad in long red coats and black fur hats before leaving the country. Since their arrival, the group has not been spotted by local media leaving their cabins as of press time.

A separate group of 23 members from the orchestra, mostly technicians, arrived in South Korea on Monday with equipment, bringing the total number of Samjiyon Orchestra personnel currently in the South to 140, according to the South’s Unification Ministry, which handles inter-Korean affairs.

On Monday night, the ministry announced that it would specially lift its sailing ban for North Korea’s Mangyongbong-92, on which the orchestra members were to ride to reach the South, to support a successful PyeongChang Olympic Games.

Pyongyang, which previously said its Samjiyon performers would take a road linking the two countries along the west coast, changed its plan last Sunday and told Seoul they would ride the ship to a South Korean port, using it as accommodation during their stay here.

The Mangyongbong-92 is not blacklisted under United Nations Security Council resolutions but Seoul bans any North Korean vessel from sailing in domestic waters as part of the so-called May 24 measure.

The package of sanctions, which also include the halting of all aid projects to the North and inter-Korean trade deals, came as a result of North Korea’s sinking of the South Korean corvette Cheonan, which claimed the lives of 46 sailors on March 26, 2010.

North Korean media reported Tuesday that the art troupe, led by department director of the Ministry of Culture Kwon Hyok-bong and leader of the Samjiyon Orchestra Hyon Song-wol left Pyongyang on Monday and travelled by train to Wonsan, on the eastern coast of the country. From there, they took the 9,700-ton vessel Mangyongbong-92.

The North’s media noted that, as they boarded the train at Pyongyang Station, the delegation was given a farewell by a number of senior government officials, including Kim Yo-jong, the younger sister of Kim Jong-un. Her job title was not mentioned in the reports, but a senior Unification Ministry official said Tuesday that it appeared she was acting as deputy director of the Workers’ Party’s Propaganda and Agitation Department.

A local government official said several factors were considered by Seoul before it decided to grant the North Korean ship entry to Mukho Port in Donghae. Among several options in the province of Gangwon, where the first concert will be held this Thursday in Gangneung, Sokcho Port was crossed out because it was too far from the concert hall.

Jumunjin Port in Gangneung lacked docking facilities for the ship since it was mainly used for fishing boats. Donghae Port, just 5 kilometers (3 miles) from Mukho Port, was in the vicinity of a South Korean Navy base and offered poor access to the highway leading to Gangneung.

Mukho Port was the best option, said the official, because it was 30 to 40 minutes away by car from Gangneung Arts Center, where the orchestra will perform, and was close to the highway.

The winners of free tickets to the concerts were announced Tuesday. After holding its first stage on Thursday, the Samjiyon Orchestra will travel to Seoul to perform on Sunday at the National Theater of Korea in Jung District, central Seoul.

This morning, 229 North Korean cheerleaders, 26 taekwondo performers, 21 reporters and four National Olympic Committee officials, including support staff, will cross the border by taking a road linking the two Koreas along the west coast, in order to partake in Olympic-related events.