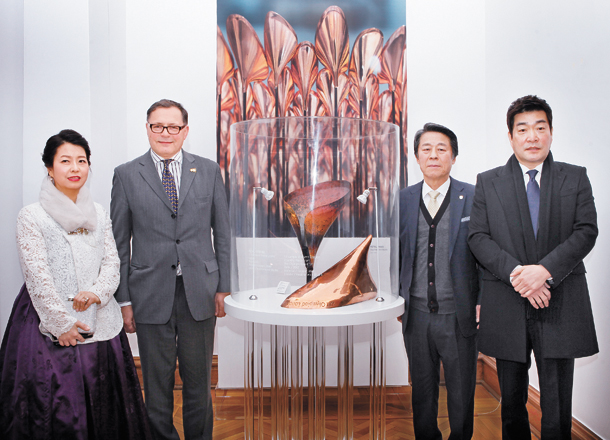 The diplomatic residence of British Ambassador Charles Hay is hosting an exhibit for the PyeongChang 2018 Winter Olympics and Paralympics through next month, showcasing the Olympic torches from the 1988 Seoul Games and the 2012 London Games.

“Now, as you know, there are going to be quite a few national houses set up for the Olympics, and most of them will be in Pyeongchang or Gangneung,” Hay said in a press briefing at the residence in central Seoul on Monday. “But we British like to be different, which is why we have our British House here in Seoul. But we did that because we want to touch not just people who are going to the Games but a much wider range of people.”

Also showcased at the residence is a model of the Olympic Cauldron from the 2012 London Games and a petal in a glass case from the original cauldron. The British House is available for viewing upon invitation from the British Embassy. The embassy will be hosting some dozen events on British culture, education and business through March.

There are 59 British athletes participating in the PyeongChang Olympics. They will be competing in events including alpine skiing, biathlon, bobsleigh, curling, figure skating, luge, short-track speed skating, skeleton and snowboard. The most experienced among them is Zoe Gillings-Brier, who is competing in her fourth Winter Olympics. She will be competing at the women’s snowboarding cross event.

Among the 59 athletes, 31 are participating in their first Winter Olympics this time.

“On the sporting side, I am pleased to see that Team GB has sent its largest-ever Winter Olympics delegation to the PyeongChang Games,” said Park Lo-ok, permanent governor of the 2018 PyeongChang Winter Olympic Games Supporters. “Taking this opportunity, I would also like to congratulate Ambassador Hay for completing his very successful three years term soon.”

The British House will also host a farewell reception for the ambassador at the end of the month.