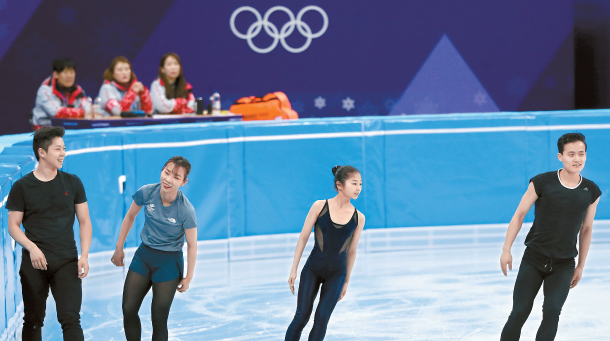 The North and South Korean figure skating pairs promised each other they’d meet up at the 2018 PyeongChang Olympics. After a few months of uncertainty, they were finally reunited at Gangneung Ice Arena in Gangwon on Monday.

Since 2016, the two pairs have been training together under the same coach, Bruno Marcotte. South Korea’s Kim Kyu-eun and North Korea’s Ryom Tae-ok, who were born in the same year, have formed a good friendship after training together. While the South Korean pair - Kim and Alex Kang-chan Kam - started training under Marcotte in 2016, the North Korean pair - Ryom and Kim Ju-sik - moved to Montreal last year. The two pairs got closer as the South Korean skaters helped their northern counterparts communicate in English.

“We got close by sharing gimbap [seaweed rice rolls] and kimchi,” said Kim Kyu-eun. “I think I got closer to Tae-ok because we are the same age. She asked me simple sentences in English so I taught her.”

By the end of their training, the two promised each other they would meet again at PyeongChang. They were once in danger of having to compete for a spot as there was talk of creating an inter-Korean figure skating team.

Though it took them a while to keep that promise, they have finally met.

Ryom and Kim earned their spot at the PyeongChang Games by finishing sixth at the Nebelhorn Trophy in September, but lost their place after failing to register by the deadline. Thankfully, the International Olympic Committee (IOC) gave them a berth once North Korea agreed to compete at the Games last month. The South Korean pair also got a spot as they are representing the host country.

At 3 p.m. on Monday, the four skaters were reunited on the ice for about 40 minutes. As this was the first time the pairs had been seen together, journalists and photographers from around the world flocked to the stadium to witness the moment.

While they were focused on their individual training, the athletes often caught each other’s eyes and smiled. The North Korean skaters left the rink first. When reporters asked Kim Ju-sik how he felt about meeting the South Korean pair, he smiled and said, “It was great.”

Kam and Kim Kyu-eun left the rink a short while later and stopped to talk with reporters.

“The quality of ice is great,” Kam said. “It was a good practice. We smiled at each other every time I had eye contact with Ju-sik.”

Prior to heading to the Olympic Village in Gangneung, Kim Kyu-eun stopped off in Hongdae, western Seoul, to get Ryom’s birthday present. Following the news of the extreme cold weather, Kim bought hot packs, cosmetics and socks with cute characters on.

Kim wrapped each gift individually, included a note in each one and tied them up with a ribbon.

“She told me that she bought gifts that [Tae-ok] could use during her stay in Gangneung, just in case she doesn’t get to take them back to North Korea,” said Kim Kyu-eun’s mother.

Despite earning their spot in the Olympics, the South Korean pair put themselves in danger of missing out once again, as Kam injured his shoulder during the Four Continents Figure Skating Championship last month.

“I got injured when we were practicing our lifts,” said Kam. “My right shoulder blade got dislocated. After I adjusted it, it swelled up badly.”

Due to Kam’s shoulder injury, the pair had to withdraw from the event and focus on getting treatment on his shoulder. Even when they arrived at Gangneung, the first question Kim Ju-sik asked local media on Feb. 1 was, “How’s Kang-chan’s shoulder?”

“Now, I don’t have much pain,” Kam said. “We’ll show a great performance at the PyeongChang Olympics, along with Tae-ok and Ju-sik.”