Tickets for the Games carry theme of peace

Tickets for the Games carry theme of peace 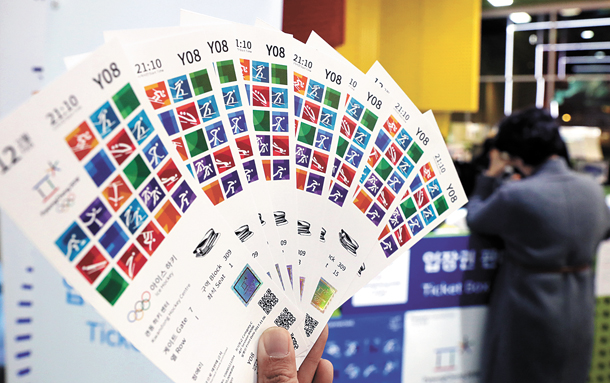 The standard tickets feature pictograms that symbolize all 15 sports to be played at this year’s PyeongChang Winter Olympics. [NEWS1]

The designs of the tickets for the PyeongChang Winter Olympics, which were unveiled a day before the Olympic flame arrived in Korea on Oct. 31, have a total of 29 variations, including 26 for sporting competitions, two for the opening and closing ceremonies and one standard design featuring images symbolizing all 15 sports at this year’s Games.

“The designs embody our message of peace and harmony for the Games,” said Lee Hee-beom, president of the PyeongChang Organizing Committee for the 2018 Olympic and Paralympic Winter Games (Pocog).

The souvenir tickets for specific sports are printed with images depicting winter athletes in motion and are decorated with snowflakes made up of letters of the Korean alphabet, or Hangul. This special design was only available on the first batch of tickets to go on sale.

Tickets for the opening and closing ceremonies are decorated simply with these same Hangul snowflakes, in gold and silver.

For the first time in Olympic history, there will also be mobile tickets, in addition to paper tickets, and tickets that can be printed at home.

To prevent ticket counterfeiting, each one features a QR code and is printed using ultra-violet fluorescent ink.

The tickets will also contain information such as the ticketholder’s name and event gate as well as the block, row and number of the seat.

Ticketholders will gain free admission to cultural events held at the PyeongChang Olympic Plaza and Gangneung Olympic Park, as well as discounts on the KTX Gyeonggang Line.

For those who bring their own car, the toll fee will be exempted and parking at designated areas will also be free. In addition, shuttle bus rides connecting parking lots and transportation bases to sports venues will also be free of charge.