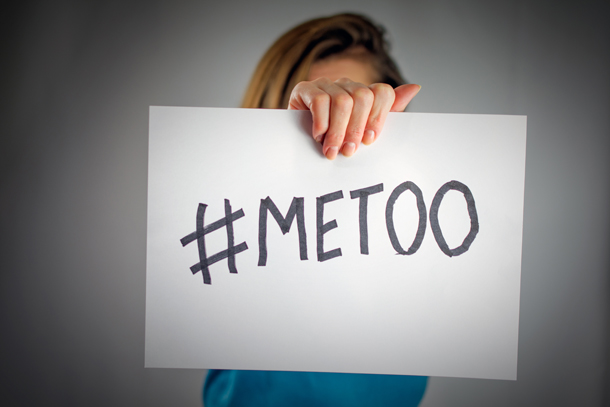 The #MeToo movement of women speaking out about the sexual harassment they have faced has spread to both the literary and movie industries, following a number of prosecutors who have shared their stories recently.

Poet Choi Young-mi has been in the spotlight over the past few days with a poem that she wrote last year and experiences that she shared on a TV news program Tuesday night. The poem, “Goemul,” which can be translated to “Monster,” shows how some literary experts sexually abuse new writers. 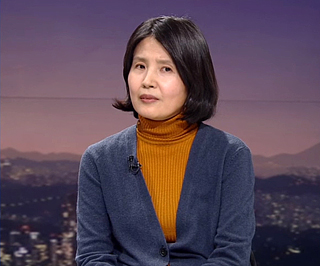 Poet Choi Young-mi talks on “Newsroom,” JTBC’s daily news program, on Tuesday about her poem whose title can be translated to “Monster.” The poem includes incidents where older writers in the literary world sexually abuse younger writers. [SCREEN CAPTURE]

“Forgot K’s advice and sat next to En/ Me too/Silk suit top borrowed from my younger sibling got wrinkled.”

The poem continues to describe the narrator seeing En touch a married editor at a year-end event for a publishing company a few years after they had been touched. The narrator shouts “Sneaky old man” at En, who is 30 years older than the narrator, and leaves.

Choi also wrote, whenever En’s name comes up as a candidate for Noteol award - which may assume is being used to indicate the Nobel Prize - and if En ever wins the award, the narrator would leave the country, as the narrator doesn’t want to live in such a dirty world.

Poet Choi Young-mi’s poem, whose title can be translated to “Monster,” is shown in Korean above. The poem has gained attention as many women have started sharing their experiences of being sexually assaulted. [JOONGANG ILBO]

Choi appeared on JTBC’s “Newsroom” on Tuesday evening and said that literature is something different from reality and it is difficult to match everything to reality. She didn’t confirm whether she was inspired by a certain writer in the poem, but she did mention that she knew victims of sexual harassment.

She spoke generally about having a model in mind while she writes poems, but characters commonly come to mind while she creates stories. Saeul Foundation of Culture, which runs quarterly magazine Hwanghae Review, asked Choi to write a poem around September, she recalled, for a special edition that dealt with issues regarding feminism.

Choi, who debuted in 1992, attended many social gatherings in the beginning of her career and said that what she witnessed then was very shocking, eventually leading her to make the decision to stop going.

“I don’t know how to express ... I had regrets ... [thinking] whether I would have joined if I had known what the literary world is like,” she said on the news program. She also said that single young women are the targets, although she added that she doesn’t know what the scene is like now, as she stopped going to social events with literary experts long ago.

As speculation began to grow over who En from the poem was, poet Ryu Keun posted on social media that sexual harassment issues regarding poet Ko Un seemed to “finally” start rising to the surface. He said Ko’s behavior has been known about since the 1960s and ’70s and mentioned that he found it surprising how literary experts and the media acted as if they were surprised. After his post received a great deal of attention, Ryu updated it and changed every mention of Ko’s name to “Ko O,” leaving the second syllable of his name blank.

In December, Lee was found guilty of sexually assaulting her female colleague when the victim was drunk and unconscious, and was sentenced to two years in prison with a three-year probation.

The issue surfaced last week, when the victim’s fiance posted the story of the assault that took place in the spring of 2015 on social media.

Following the accusation, Lee released an official statement Tuesday, arguing that she was innocent.

Lee said, “I still want to argue my innocence... The victim, who fell asleep intoxicated, woke up [in a motel in the middle of the night] and suddenly started crying. While comforting the victim, we naturally began to have sex. There were many situational factors that made me believe that the sex was consensual.”

Lee also claimed that she was unfairly questioned by the judge for being a homosexual. “Although I accept the ruling, I feel I have been falsely accused.”

She revealed the details about what happened on the day she claims to have been raped. According to her, she and four other colleagues, including Lee, went out for a drink on the day of the incident.

She claimed that she does not remember anything about what happened on the day between 5 a.m. and when she woke up later in the day with Lee in a motel. She said that she was only wearing a bra when she woke up and that Lee told her that they “slept together.”

The victim also accused a professor from Korean Academy of Film Arts (KAFA) of trying to convince her to drop the case in fear of disgracing the school’s reputation. Both Lee and the victim are KAFA graduates.

“Out Love Story” distributor Indieplug made an official apology to the victim and KAFA is currently looking into the case.