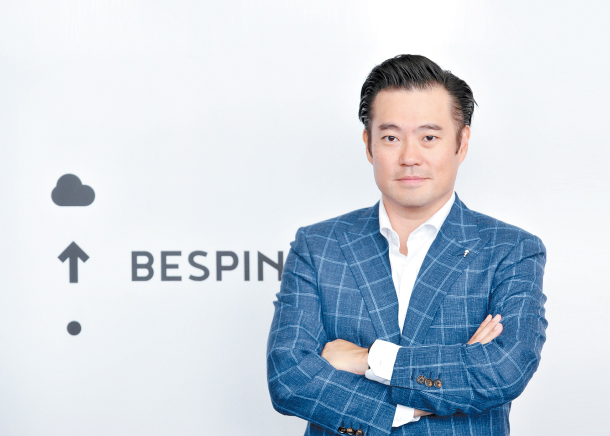 Bespin Global, a Korean start-up that is just two years old, has attracted $25 million from a subsidiary of Temasek, a Singaporean sovereign wealth fund. The enterprise cloud management and consulting service provider is the first Asian company to receive funding from ST Telemedia, one of Temasek’s portfolio companies that invests in emerging technologies.

Such a hefty early-stage investment went to the start-up devoted to the relatively obscure field known in the industry as “managed service provider (MPS),” largely because of the enormous growth potential of “the cloud,” according to Lee Han-joo, CEO and co-founder of Bespin Global.

“Large companies worldwide such as Samsung Electronics spend 2,000 trillion won ($1.84 trillion) on IT services every year,” he said during a recent interview with the Korea JoongAng Daily at an office in Samseong-dong, southern Seoul. “But spending on cloud services offered by giants such as Amazon Web Services, Google and Microsoft’s Azure is less than 100 trillion won, a tiny share of the pie. I am pretty sure the cloud budget at large firms will reach 2,000 trillion won at a tsunami-like pace within the next five years and we will be grabbing that opportunity.”

What Bespin Global does is plan, deliver and manage various cloud services for its corporate clients, which are vaguely aware that the cloud is crucial for their future but do not have their own seasoned experts. The company already has 190 big-name clients including Samsung Electronics, LG Electronics, AmorePacific and Hanwha Techwin. Some 20 clients are from overseas, most of them Chinese. The number of employees has also grown from just five to 300. 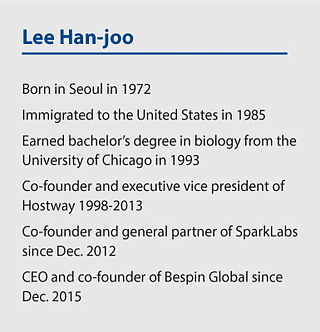 “The worldwide trend is that every company has to become a cloud company, which is our own premise too, in an era when every device - home appliances and smartphones - as well as vehicles and even power suppliers are connected over the internet. It shouldn’t be like, ‘I am going to use the cloud,’” he said. “Any company that does not understand and adopt the cloud will die. Don’t think that the cloud is just for Facebook and Google. If you start thinking that way, you will disappear.”

MPS is a fledgling industry in the United States and some other leading economies, but there are not yet any standout players in Asia, and the Temasek subsidiary was quick to invest in the start-up based in Seongnam, Gyeonggi. Last July, Bespin Global attracted a combined 17 billion won of investment from various investors including Legend Capital, a leading Chinese venture capital firm.

Lee, a serial entrepreneur, doesn’t think his goal is too farfetched of fostering his company into a cloud MPS giant that will be dominant not just in Korea but also in China and other parts of the world.

“Don’t just give up, saying, ‘Oh, AWS, Google and Microsoft are already dominating the cloud market,’” he said. “If you watch closely, you can find a niche in this massive market for us. You may start as a twig but can be a trunk in the end.”

Before launching Bespin Global, named after the planet Bespin in the epic “Star Wars” series, which the Korean-American is a huge fan of, Lee had already successfully run web hosting firm Hostway between 1998 and 2013. Its annual revenue hovered above 200 billion won, but he diverted his attention to cloud management services after a number of cloud server firms began to emerge. Lee sold Hostway to an American private equity firm.

Simultaneously assuming the role as co-founder and general partner of six-year-old Korean accelerator SparkLabs, which focuses on start-ups advancing abroad, Lee is fully engrossed in investing in any promising start-up engaged in cloud-related services. Some of the budding firms he has invested in as an angel thus far include Bloco, X-brain, Qubitsecurity, Watap and Kloser.

“Korea is busy looking for the next economic growth driver, but I already see it: the cloud,” he said.

Following are edited excerpts from the interview.

Q. What does the latest investment from ST Telemedia mean?

A. Where the investment comes from isn’t too important to us. What’s significant is that a foreign national wealth fund is moving fast and it has invested in a Korean company. The fact that ST Telemedia chose a specific field means that it has growth potential.

I wish to set an example when it comes to scaling up the process of a tech start-up - typically spotted in Silicon Valley and other leading markets but not in Korea yet. We are only two years old and are still in deficit, which is normal for a tech start-up, but we are getting bigger.

You encourage Korean entrepreneurs to advance into markets abroad. What’s the reason?

Koreans tend to be stuck in the geographical framework, which limits your scope and growth. A market is a market. Don’t distinguish between local and foreign markets. Mark Zuckerberg did not think of the U.S. market as his target.

You keep saying that the growth potential for enterprise cloud technology is particularly enormous in Korea. Why?

You see tons of developers in Gasan Digital Complex [in southern Seoul] who walk around like zombies. They are the coders who solve problems for large companies in the past decades. Enterprise coding is not something that can be done by novices and those coders in Gasan have decades of experience in the field. What they need is self-confidence and an ecosystem that could push them to entrepreneurship.

What kind of person do you think has to become a start-up entrepreneur?

The person is supposed to be nuts. Running a start-up isn’t something an ordinary person can do. It doesn’t matter whether you are an introvert, extrovert, eloquent and so forth. You just need to be a little crazy. If you are looking for a work-life balance, be a salary earner. I have seen few entrepreneurs who find meaning in work-life balance. But founders are not supposed to demand that kind of attitude of their employees.

Do you just know at first sight whether a person will succeed as an entrepreneur or not?

Mostly. But even people that appear promising won’t necessarily succeed at the end of the day. What’s important is that failure isn’t that abnormal. One success out of every 10 would be enormously lucky and even five successes out of 100 challenges should be appreciated. Success is tantamount to a miracle and failure is okay. Demanding a miracle of everyone isn’t right.

Korea tends to focus too much on searching for the “key to success” when it comes to forging regulations or systems. But there is no such thing as a key to success. It’s so mythical that finding it is no different than finding the Holy Grail. That’s why there are so few proper policies from the government.

The authorities should think about ways to help the 95 people who fail to rebound, because the five who succeed would have succeeded without government support. We don’t need to worry about the latter.

The reason Silicon Valley became so successful is that the city has the lowest cost for failure. Even when you fail with your own company, you can get employed by another company and it’s taken as a very natural course of action. But Seoul isn’t too bad at all either when compared to Tokyo, Berlin and London. It’s very dynamic and has excellent talent - the younger generation in particular. Its location - in between Beijing and Shanghai - is also an upshot.

What could the government do to help entrepreneurs?

They need to spend money on those who fail, not those who succeed. If so, even if you fail after founding a company with a 100 billion won fund, you can be fine and start over. I think the president should roll out the change because no government officials would dare to do so. Of course individuals should change their mindset: there’s nothing they can’t do.

The Korean government’s initial reaction was very typical: just cutting out everything related to cryptocurrencies instead of trying to fix the problematic part. Fortunately, the authorities eventually made a policy compromise to insist on cryptocurrency trading under real names. I think Korea was pretty adventurous to go for that choice. We still don’t know where the rugby ball of cryptocurrency will be thrown. Let’s just let it be, for now.

What do you think of the government’s stance on separating cryptocurrency issues from blockchain?

It’s total nonsense. Blockchain is a public ledger where transactions are verified and added by cryptocurrency miners. It’s a cloud that any de-centralized individual or enterprise with a capitalistic framework can form voluntarily. There is no single authority that could control cryptocurrency. Those aged 50 and older tend to be repulsed by new technologies such as blockchain. Since they find it too difficult to understand, they just refrain from having a fundamental discussion. Even if they manage to understand new technologies, a conflict of interest hits them.

A new currency being born is an enormous affair that requires great effort. Cryptocurrency just popped out with little information and negligible effort. Applying the same yardstick to bitcoin as to the U.S. dollar or the euro is preposterous. But the power bitcoin has gained in such a short time span on a voluntary basis is testament to the power of digital transformation and the fourth industrial revolution.

Businesses in Korea complain about excessive regulations. What do you think?