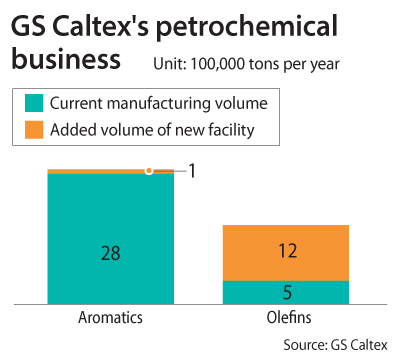 The 430,000-square meter (106-acre) facility will have the capacity to produce 700,000 tons of ethylene and 500,000 tons of polyethylene per year, the company said, more than triple its current capacity. Both materials are used to make plastic goods.

Construction is scheduled to begin next year with the goal of starting operations in 2022.

Olefins refer to organic compounds containing hydrogen and carbon with at least two carbon atoms linked by a double bond. It is one of the two most common petrochemical classes alongside aromatics. 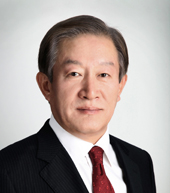 Until last year, GS Caltex’s petrochemicals business was centered on aromatics, but the company hopes to expand olefin production with its new factory.

GS Caltex is especially banking on ethylene, the base material for plastic. Ethylene can be polymerized into polyethylene that can then be molded into vinyl and other plastic goods.

According to research firm IHS Markit, the global polyethylene market produces 100 million tons a year, and demand has risen an average of 4.2 percent annually.

GS Caltex’s new facility will have the advantage of being able to obtain ethylene from various sources. While most producers extract the material by cracking naphta, GS Caltex’s mixed feed cracker will also be able to process liquefied petroleum gas and other types of gas from refined crude oil.

“The investment decision was made under the initiative of developing a balanced business portfolio by enforcing our olefin business, which has high growth potential and can result in manufacturing downstream products,” the company said in a statement Wednesday.

GS Caltex expects the new factory to generate more than 400 billion won per year in operating profit. At the moment, its portfolio is heavily dependent on oil, which accounted for more than 60 percent of operating profit last year up to the third quarter.

But relying too much on oil has its pitfalls, especially when sales are affected by geopolitical factors. Many Korean refiners have been expanding their petrochemical and other businesses since 2014, after plummeting oil prices drove the country’s top four refiners in the red.

Another reason why oil refiners are heavily investing in petrochemicals and other businesses is the higher margins. Korea’s top four refiners made good profit last year out of revenue in those sectors.

GS Caltex has emphasized expanding its petrochemical production. The company’s chairman, Huh Jin-soo, called a balanced portfolio “one of the company’s core tasks” in his New Year’s message last month.

Earnings from GS Caltex’s petrochemical business have been relatively low compared to its peers, SK Innovation and S-Oil, which made more than 50 percent of their operating profit last year from petrochemicals and lubricants.