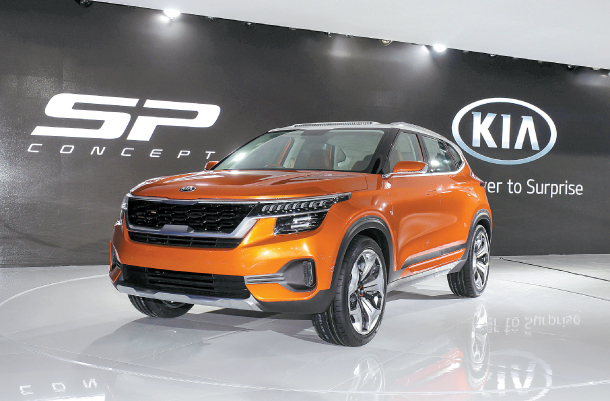 Kia Motors, Korea’s second-largest automaker by sales, rolled out a new compact SUV concept in India on Wednesday, heralding its full-fledged foray into the local market.

The compact SP SUV concept was showcased at the 14th Auto Expo 2018, India’s largest motor show that kicked off near New Delhi for a week-long run.

Kia said the spacious compact SUV with a sleek design is the company’s strategic model specifically designed to target motorists in India where small crossovers are very popular.

The Korean automaker said it plans to mass-produce the new compact SUV at its Indian plant, scheduled for completion during the second half of next year.

“Kia’s entry into India represents the company’s stronger status as a global brand, as well as a step closer to the completion of a global production network,” Kia CEO Park Han-woo said at the rollout. “Kia will seek to establish a new standard in the Indian auto market through differentiated marketing and customer service.”

Kia had failed to make forays into the Indian market due to high tariffs of up to 60 percent imposed on auto imports.

Last April, however, the company struck a deal to build a $1.1 billion manufacturing plant in Anantapur, southeastern India, formally declaring its entry into India. The plant broke ground in October.

On top of the compact SP SUV concept, Kia unveiled 15 other models at the motor show including its Stinger sports sedan and three eco-friendly marques.

Kia said it plans to produce and sell three or more models in India within three to five years.