‘I question whether we must give birth to serve the nation’

‘I question whether we must give birth to serve the nation’ 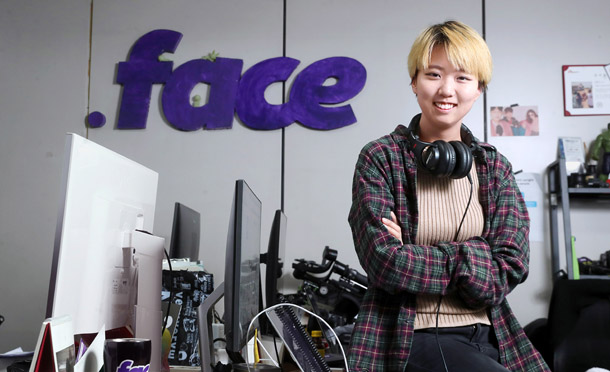 On Dec. 26, the 28-year-old Cho So-dam was photographed standing next to President Moon Jae-in, just after the sixth meeting of the Presidential Committee on Aging Society and Population Policy. The founder and CEO of Dotface, an online media start-up, she was selected by Forbes for its 2017 “30 Under 30 Asia: Pioneer Women” list.

Cho has previously never worked on problems related to Korea’s aging society and fertility, but she was nevertheless selected to be the first committee member under 30 since it was established in 2004. The average age of committee members is over 50.

Cho sat for an interview with the JoongAng Ilbo, an affiliate of the Korea JoongAng Daily, at her office in Seodaemun District, western Seoul, on Feb. 1.

Q. What kind of work do you do?

A. I run a media start-up company. We create videos that are a cross between news and documentaries. We have about 170,000 followers and subscribers on social media platforms such as YouTube and Facebook. Of these followers, 80 percent are 18 to 32 years old and most of them are females. All eight of our employees are young, as well, being mostly in their 20s and early 30s.

Is it true that you initially rejected the offer to be a member of the Presidential Committee on Aging Society and Population Policy?

When I think of key government policies on fertility, I recall a government study, released in December 2016, that mapped where women of childbearing age live, and a state-backed report that said highly educated females are causing a decrease in the number of new babies being born. I distrusted the direction of the government’s policy.

What made you change your mind?

The committee convinced me. They said over half the committee is female and that they need someone who has a different viewpoint, and so I was convinced. As a young, unmarried, working woman, I thought I had to represent those who are concerned about forming a family.

You are the youngest member in the committee’s history. What do you think about this?

I was surprised. Because of this, I felt most of the dialogue and meetings were dealing with topics that only concern married people. At the first meeting, the topic was “A society where you can spend one more hour with your child,” and I had to make an effort to understand this.

I think there are those in their 20s to 30s who want to spend more time with their kids, and some who might not have even considered marriage or kids yet. I believe the job of the committee is to provide various options for the people, rather than just pushing for a higher birth rate.

In the first meeting, you said that there is more interest in abortion than in giving birth. What was the reason behind this?

While this may sound too radical, I think the government has been dealing with the fertility issue by regulating women’s bodies. When the government was restricting births, there were abortion surgery buses going around nationwide. Now the government is giving grants to encourage more women to give birth. It fails to recognize the woman’s right to her own body and treats women only as mothers.

In 1990, the year you were born, Korea recorded the worst gender ratio in its history. What is your opinion on this?

I heard there were many abortions of female babies at that time. As I grew up, I’ve been told I was a girl born in a society that has a culture of preferring boys over girls. Now, people are saying those born in the 1990s are the last hope of solving the low fertility problem. We were not born, nor do we live, to be mobilized for the country, so I question whether we must give birth to serve the nation.

The slogan of the committee is “A country where you can enjoy your work and raise a child.” What is your opinion on that?

I hope that really happens. However, some of my friends ask, “Do I really need to work and raise a child at the same time? Just the thought of it is awful.” Our slogan can make some people happy, but not everyone has the same definition of happiness.

After all, there are those who are not married, and those who are married but do not give birth, as well as those who give birth without getting married. There are so many diverse groups of people and so many different ways of being, so I think the government should give people more options instead of deciding on one path.

In order to make that happen, what should be the committee’s goal be?

I think the committee should look into whether we are just a fertility index, and question whether we really have to give birth, whether our country will fail if we don’t and on how important having an economically active population is. We are already an aging society with low fertility.

That is our future that we cannot avoid it. The economic structure is changing and our styles of life are also changing. So taking this into consideration, we need to figure out how to create conditions for more plural forms of happiness.

What kind of voice do you plan to bring to the committee in the future?

I will talk about how the government should support various types of families. Currently, 40 percent of households are one-person households. A single family cannot manage child care any more, but child care and welfare are all structured around the family unit.
Korea’s low fertility is not an issue of people not having children. Rather, it is a phenomenon involving a variety of problems, such as housing and financial issues.

I live in a room with a monthly rent of 350,000 won [$322], with a key deposit of 5 million won. Unlike other committee members, I can say that younger people cannot get married because they do not have a house, but there is nobody on the committee who feels that sort of reality directly.

I cannot research policies and I do not have expertise, but what I can do best is continue to reflect on the reality of those around me and feed that into my opinions.