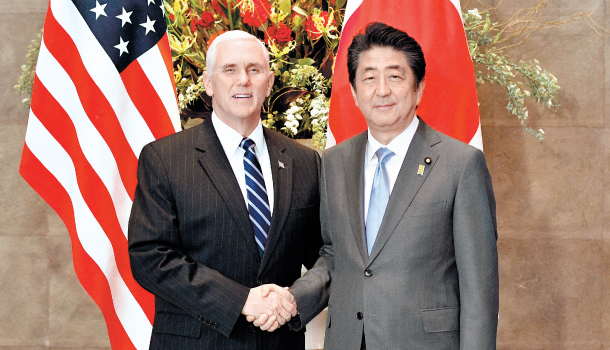 U.S. Vice President Mike Pence, left, is greeted by Japanese Prime Minister Shinzo Abe as they head into a meeting at Abe’s official residence in Tokyo on Wednesday. [AP/YONHAP]

Vice President Mike Pence and Japanese Prime Minister Shinzo Abe emphasized maximizing pressure on North Korea over its nuclear and missile programs during their meeting Wednesday in Tokyo, before heading to the PyeongChang Winter Olympics.

The two met at the prime minister’s residence and held a joint press conference afterward, in which Abe said that he and Pence shared reservations about what he described as North Korea’s “smile diplomacy.”

Pence said, “We will not allow North Korean propaganda to hijack the message and imagery” of the Olympics, adding that the North will not be allowed “to hide behind the Olympic banner the reality that they enslave their people” and threaten the region.

He warned that the United States will unveil the toughest, most aggressive economic sanctions against the North.

While Abe said he held in regard inter-Korean talks ahead of the PyeongChang Olympics, he added, “it has to be squarely recognized that North Korea will continue to develop its nuclear and missiles program.”

Abe emphasized that there should be no dialogue with North Korea until it shows concrete action toward scrapping its nuclear program, while also adding that Pence emphasized their countries’ alliance.

Over Twitter Wednesday, Pence said his meeting with Abe would focus on joint efforts to “put crippling pressure on North Korea to abandon its nuclear efforts.”

Both Pence and Abe are scheduled to attend the opening ceremony of the Winter Games in Pyeongchang County, Gangwon, on Friday. Pence is expected to meet with President Moon Jae-in in Seoul ahead of heading to the ceremony and also meet with North Korean defectors.

Washington, however, has not ruled out the possibility of contact between the United States and North Korean officials during the Olympics, with the White House, Secretary of State Rex Tillerson and Pence all touting a “wait-and-see” approach.

White House Press Secretary Sarah Huckabee Sanders in a briefing Tuesday only said, “We’ll see,” with regard to whether there will be any such contact between Pence and North Koreans, which could be seen as a slight shift in tone from last month, when the State Department emphasized that “now is not the time” for talks with Pyongyang.

Tillerson in Lima on Monday also said, “We’ll just see,” when asked whether there will be an opportunity for any kind of meeting between Pence and North Korean officials.

Likewise, Pence said to reporters in Alaska before leaving for Tokyo, “President [Donald] Trump has said he always believes in talking, but I haven’t requested any meetings. But we’ll see what happens.”

Heather Nauert, U.S. State Department spokeswoman, in a press briefing Wednesday said that while she cannot speak for the vice president, “There are no plans to meet with any North Korean officials during or after the Olympics; I want to be clear about that.”

Nauert noted that “there is no shift in U.S. policy,” adding that the North “must, once and for all, abandon its desire for nuclear weapons and also for ballistic missiles.”

She continued, “Do away with that desire, stop, and then perhaps we’d be willing to come to the table and have a conversation with them about it.”

Kim Yong-nam, president of the Presidium of the Supreme People’s Assembly, will lead North Korea’s high-level delegation to the Olympics. North Korean leader Kim Jong-un’s younger sister, Kim Yo-jong, first vice-director of the ruling Workers’ Party Central Committee, will be a part of this delegation.

Nauert said that Pence’s visit will “further demonstrate the strength of the U.S.-[South Korea] alliance and underscore the importance of the maximum pressure campaign all around the world against” North Korea as well as “remind the world of the humanitarian rights abuses” by the regime.

The White House in a statement Tuesday said that Pence and the second lady, Karen Pence, will lead the U.S. delegation to the Olympic Winter Games, “to reinforce the strong U.S. presence on the Korean Peninsula and send a clear message of American resolve to the North Korean regime.”