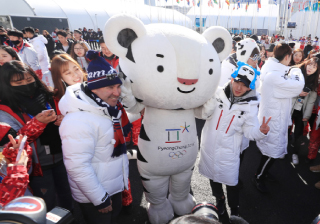 “I went back to 2002,” said a friend when we met last week. I had seen him three months ago. Another friend explained, “We just got back from Hanoi.” Then I knew what they meant. While they were in Vietnam, the 2018 AFC U-23 Championship was held in China, and the Vietnam national U-23 football team led by head coach Park Hang-seo was the runner-up.

It was an unexpected holiday highlight for the two friends. “We were at a cafe, drinking iced coffee, and in no time, the cafe was packed with people. We could not even leave. It was the day when the Vietnamese team played against Qatar in the semifinal. We had to watch the game at the cafe, and before we knew it, we were the ‘red devils’ all over again.”

They couldn’t keep their voices down. “We were screaming and dancing with the Vietnamese people, arms around the strangers.” They said that when the Vietnamese team won in the penalty shoot-out, they were as happy as if Korea had won.

The final match was a few days later, and they watched the game with restaurant employees. They were so busy watching television that they were not serving the guests. With them, the two Korean visitors chanted, “Park Hang-seo,” the team’s Korean manager. They taught Vietnamese people how Koreans cheer. While Vietnam lost in the final, they celebrated anyway. I completely understand what they meant when they said they were back in 2002.

As I heard their stories, I thought that I was also in 2002 for a while, thanks to Chung Hyeon, who made it to the semifinal round in the Australian Open. The anticipation for the match against Roger Federer was on par with that of 2002, considering how long ago it had been. Chung retired in the semifinal round, but I was moved by his painful blisters. In an interview with JTBC upon returning to Korea, he said, “My feet already went beyond their limit.”

It was the language of someone who had reached the stage that one cannot get to without real passion. It was the kind of story told by Guus Hiddink and Park Ji-sung after the 2002 World Cup and Kim Yuna after the 2010 Vancouver Winter Olympics.

Other successful legends will make us dance in the future — hopefully the PyeongChang Winter Olympics opening today will be one of them.

The slogan of the Olympics is “Passion, Connected,” and the spirit will spread in and out of the stadiums. Sport is not just about winning gold. The tears and sweat as athletes strive to perform their best and to make the event successful should not be obscured by senseless rhetoric like “Pyongyang Olympics.”