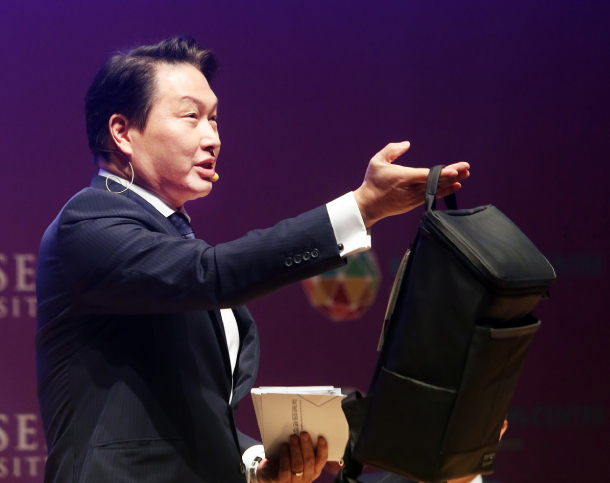 SK Chairman Chey Tae-won holds up a Continew-branded backpack made by social enterprise Morethan, which is supported by the conglomerate, at a forum in Seoul on Thursday. [SK GROUP]

“What do you think this bag is?”

In the middle of delivering a speech at a forum on Thursday, SK Chairman Chey Tae-won abruptly picked up a backpack and threw a question to the audience.

When someone called out that it’s the bag that boy band Big Bang carry, the chairman replied, “The answer is BTS, to be precise, and the bag is made by Morethan, a social enterprise,” adding that he will give it away as a gift after the speech.

Morethan is a fashion retailer that makes bags and small leather goods under the Continew brand using upcycled textiles and components from scrapped vehicles, making use of waste material and protecting the environment - similar to Switzerland’s Freitag brand. The firm hires people from the lower income bracket, as well as a number of North Korean defectors, and SK Innovation, a unit devoted to manufacturing and distributing petroleum products, has been supporting it.

The oil arm of SK has been engaged in various social enterprise businesses as part of its sustainable corporate social responsibility activities instead of making a one-time donation. The company is also responsible for a bakery in Jeonju that recently found huge success with its bread containing bibimbap, or rice mixed with vegetables and marinated beef.

Before the appearance of the backpack, Chey was describing the “social value” that his business empire - the country’s third-largest after Samsung and Hyundai Motor - will be pursuing.

“There should be room for companies to contribute when it comes to resolving problems that threaten humankind - poverty, inequality and environmental pollution - and foster a sustainable future,” said the chairman. “I believe we [SK] could apply social value to corporate management to that end.”

As markets typically struggle to adopt social enterprises due to their public property-like characteristics, economic incentives are necessary until they have gained a tangible foothold in the market, he noted. That’s why SK introduced the so-called social progress credit back in 2015, which is given to social enterprises as a compensational system in proportion to the social value they have created, Chey explained.

He was addressing the inaugural Global Engagement and Empowerment Forum on Sustainable Development at Yonsei University in western Seoul. The two-day forum is dedicated to addressing social issues ranging from poverty and inequality to jobs and economic growth between governments, academia, international institutions and the private sector. Some 600 attended the event, including United Nations Secretary General Antonio Guterres and his predecessor Ban Ki-moon.