Clockwise from left: Officials from the Presidential Security Service monitor the position of VIPs moving in assigned cars during a rehearsal for the Olympics held Saturday; Presidential Security Service agents check a drone mounted with thermal imaging cameras that will patrol the venues; Police participate in counter-terrorism drills on Jan. 31 at Incheon International Airport prior to the Olympics; An agent sprays expellent in a counter-terrorism drill held at the Incheon Airport on Jan. 31. [PRESIDENTIAL SECURITY SERVICE, YONHAP]

As more than 30,000 world leaders, dignitaries, athletes and spectators will gather in Gangwon for the opening of the 2018 PyeongChang Winter Olympics this evening, Korea’s security services have been tightening their watch on potential security threats, hacking and even terrorist attacks that could threaten the safety of the Games.

The Olympics is more than just a simple athletics meet-up. It invites huge crowds from all around the world, including senior representatives of a number of governments - this year about 26 VIPs from 21 countries are scheduled to attend.

The National Counter-Terrorism Center takes overall responsibility for security at the Games, along with 19 related institutions like the Ministry of National Defense, National Police Agency and National Fire Agency.

The Presidential Security Service, an independent agency responsible for the protection of the president and the Blue House, is in charge of protecting the summit-level participants.

With the PyeongChang Olympics putting a heavy focus on innovative technology such as the 5G network and connected devices, the National Counter-Terrorism Center and related agencies have announced that they will also employ the latest gear to safeguard VIPs and spectators visiting the event. 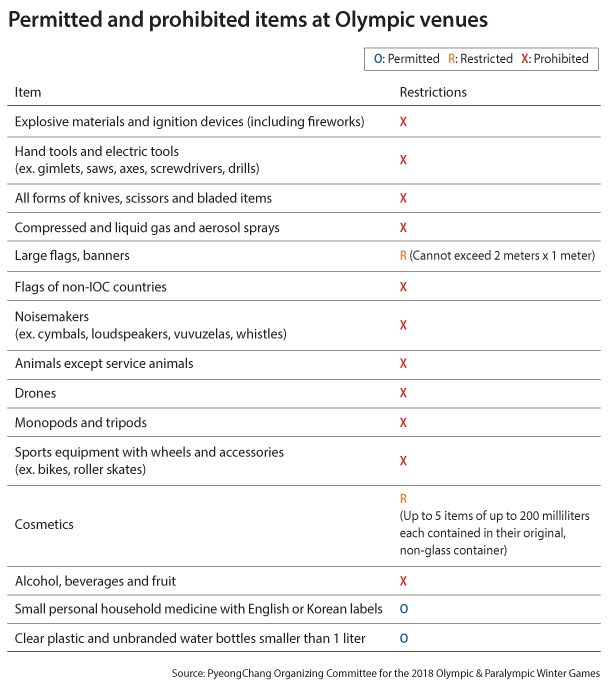 The Presidential Security Service has created a special force to escort VIPs from Incheon International Airport. Dignitaries from each country will be taken to exclusively assigned cars, with their real-time position tracked by the agency’s central command center. Key routes to the Olympic venues and VIP accommodation are being closely monitored with state-of-the-art surveillance cameras that are able to recognize and track certain objects or people, according to a spokesperson from the agency.

“We have deployed full security systems capable of responding to any situation, but they are not visible to the public,” another spokesperson for the agency said.

The monitoring system is also connected with the National Intelligent Service as well as the National Police Agency and the military to ensure a joint response.

Once a VIP arrives at an Olympic venue and leaves the tracked vehicles, patrolling drones take over the surveillance. It is the first time that security drones have been deployed at an event in Korea. Drones with full high-definition and thermal imaging cameras keep watch around the stadiums and select spots that require close monitoring. The agents that run the drones were selected last year and have been through intensive training, according to the secret service.

But since the agency doesn’t have exclusive access to drones, the National Counter-Terrorism Center last month installed a radar developed by the Korea Advanced Institute of Science and Technology to spot unauthorized unmanned vehicles flying in Pyeongchang County, Gangwon. The radar can recognize unauthorized drones within a 1.2 kilometer (0.74 of a mile) radius. Spectators will not be allowed to bring drones inside the venues.

Hacking is a major concern.

The email addresses of organizations in Korea related to the Olympic Games such as icehockey@pyeongchang2018.com were targeted, potentially in an attempt to steal victims’ financial information. The National Policy Agency also put up a notice on Tuesday that there have been fake emails sent from ifo.kr@nctc.go.kr containing a Microsoft Word document with malware.

Concern over potential hacks grew after multiple media reports suggested that Russian hacker group Fancy Bear had hacked the servers of the International Olympic Committee as well as the World Anti-Doping Agency, though the Russian government on Wednesday denied the claims.

North Korea, which is taking part in the Games, is also known to have some of the world’s best hackers.

As concerns elevate, the Ministry of Science and ICT and Korea Internet & Security Agency announced Wednesday that they will closely monitor denial-of-service attacks, malware implants and all other cyber attacks. The institutions are cooperating with telecom companies as well as antivirus program providers to stop the spread of malicious software and upgrade antivirus software as soon as they spot any attempt at phishing.

The Presidential Security Service also has a cyber security team that constantly monitor the software used to operate Olympic facilities for any sign of a hacking attempt.

Electricity, fire and elevator systems at the Olympic Plaza in Pyeongchang are connected and controlled by an automatic internet-based system. The cyber security team’s task is to prevent the server from being hacked and remotely controlled for malicious purposes.

The Science Ministry warned individuals not to open emails sent from unidentified sources, to upgrade security software in personal computers and also to back up important data onto portable USB drives to avoid cyberattacks.

A biological or chemical attack could be the biggest threat to the Olympics as even a tiny amount of dangerous material could cause chaos.

On the last day of January, 250 agents from the National Intelligence Service as well as the Ministry of Land, Infrastructure and Transport ran a drill to practice dealing with both a bomb threat and a biological weapon attack.

The Presidential Security Service set up security systems against chemical, biological and radiological threats near airports and major stadiums and deployed chemical weapon detectors at important locations. The service will deploy a special car, called Abadis, fitted with a sensor array that can detect about 400 different toxic chemicals within a 5 kilometer radius, possibly even while on the move.

At smaller stadiums, portable devices will be used. Portable chemical detector Chempro-100, which can detect weaponized chemical gasses, and Nano-Raider, a radiation detector, are among the devices being deployed at Olympic venues.

The National Counter-Terrorism Center has also formed a committee of 12 counter-terror organizations that will constantly monitor a list of potential terrorists using data from Interpol.

Screening at airports and ports was tightened at the end of last month.

Korea Customs Service is thoroughly screening the belongings of all visitors entering Korea. The agency has added an additional 243 people to check travelers’ belongings.

Spectators will also be screened at major KTX stations including PyeongChang Station, Jinbu Station and Gangneung Station and before entering Olympic stadiums. Spectators are advised to take note of the prohibited items before heading to the venues, as the security screening at the opening ceremony rehearsal on Feb. 3 ended up taking hours. The organizing committee is confident that the process will be much smoother tonight as the fully-fledged system is rolled out.

Ahead of the Olympics, the Korean counter-terrorism body last month deported 17 foreigners from five countries that were considered a potential terror risk.

“We have done regular inspections [on our counter-terrorism systems] and we are sharing terror-related information with Interpol as well as security forces from other countries in real time,” said Prime Minister Lee Nak-yon in a government meeting held Wednesday.

“Anybody considered suspicious will be turned away at Incheon Airport. Suspicious people in Korea are under constant surveillance,” he said.

As the event involves dignitaries from all over the world, keeping them safe is not only Korea’s concern. A joint response system with the secret services of other nations is crucial to ensuring an effective safety network at the Games.

According to the Presidential Security Service, it held security check-ups on major event halls and transport routes with the U.S. Secret Service earlier this month. Officials from Russia’s security service also visited Korea in October last year to share their past experience of keeping the Sochi Winter Olympics secure. As China is preparing for the next Winter Olympics to be held in Beijing, cooperation with Chinese security personnel will also be strengthened.