Delivery man finds himself on the run : ‘Golden Slumber’ is both action-packed and sentimental

Delivery man finds himself on the run : ‘Golden Slumber’ is both action-packed and sentimental 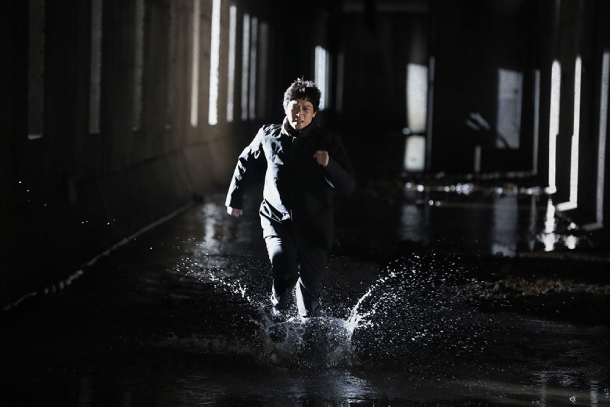 The upcoming “Golden Slumber” is a Korean film adaptation of a novel by Japanese writer Kotaro Isaka. [CJ ENTERTAINMENT]

An ordinary delivery man with a heart so warm that he was honored with an exemplary citizen award for saving a pop star from a potential criminal is later falsely accused of being a terrorist that killed a presidential front-runner. While the public’s attention is focused on the man, the presidential front-runner’s party nimbly switches its candidate and starts chasing after the delivery man who himself has just barely survived a premeditated murder attempt by government authorities.

In 2010, the Japanese version of the film was released in Korea under the same title. It was a complete flop, selling only a total of 66,200 tickets. Because of the original’s performance in local theaters, some cineastes were hesitant when Gang suggested making a Korean version of the story seven years ago, but he had his reasons.

“I believed there is a substantial message with a clear subject embedded in the original story,” Gang explained during a press event held in central Seoul on Wednesday. 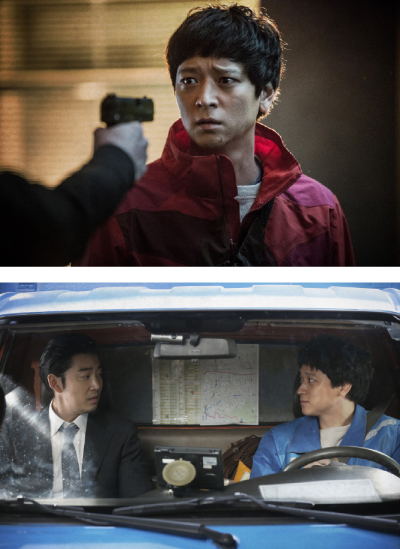 Gang added, “As I grow older, I have gradually felt distant from childhood friends. We used to share similar thoughts, but these days, I often feel surprised at how different our thoughts [on life] have changed. I wanted to include such [sentiment] into the film.”

It is not easy to imagine Gang - an actor known for his good looks and modeling background - play such an ordinary character. Throughout his 15-year career, the actor has experimented with diverse roles, ranging from a lonely rebellious teenager in “Romance of their Own” (2004) to a mischievous wizard in “Jeon Woochi: The Taoist Wizard” (2009) and a special agent for North Korea in “Secret Reunion” (2010).

Based on Gang’s previous roles, the humdrum nature of the actor’s character in “Golden Slumber” was a concern for Noh Dong-seok (“My Generation”) before sitting on the director’s chair.

“I tried hard to depict Geon-u as a character that the audience can easily empathize with. But I had some doubts when Gang landed the role. But after hearing his personal stories about having been cheated by a friend in the past, I saw the commonalities between him and Geon-u.” 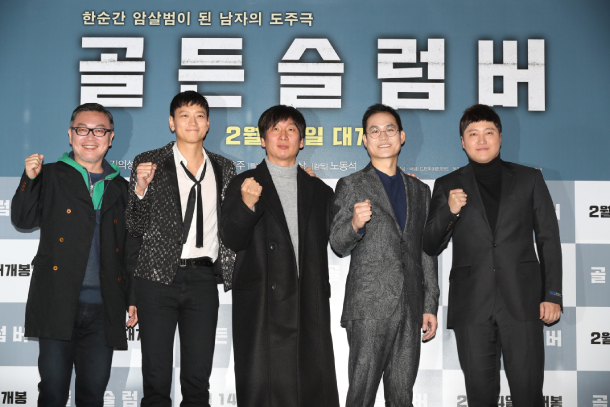 “Golden Slumber” stars Gang Dong-won, second from left, as an ordinary delivery man who gets mired in a conspiracy. [CJ ENTERTAINMENT]

The filmmaker further expressed his hopes for the movie to provide the audience with a chance to look back on their lives and think about what kind of life they have had while seeing the journey of an ordinary man trying to solve a murder case.

“Though people don’t commonly get engulfed in monumental criminal conspiracies, everyone has experienced betrayal [from close people] or felt alone in this world. I wanted for Gang to elicit those common feelings from Geon-u,” the director added.

Also notable is the movie’s soundtrack. As the title implies, the movie makes use of The Beatles’ tender “Golden Slumbers,” which conjures up the main protagonist’s nostalgia throughout the movie, while beloved singer Shin Hae-chul’s songs like “To You” and “Cheer Up” are featured during Geon-u’s chase scenes across Seoul.

“[Adding] Korean sentimentality into the movie was the most challenging [part] for me. So I naturally relied on Shin Hae-chul’s music while trying to show a new aspect of Seoul,” the director said.

The Korean version of “Golden Slumber” will arrive in local theaters on Wednesday, in time for the upcoming Lunar New Year holiday, when movie ticket sales soar.