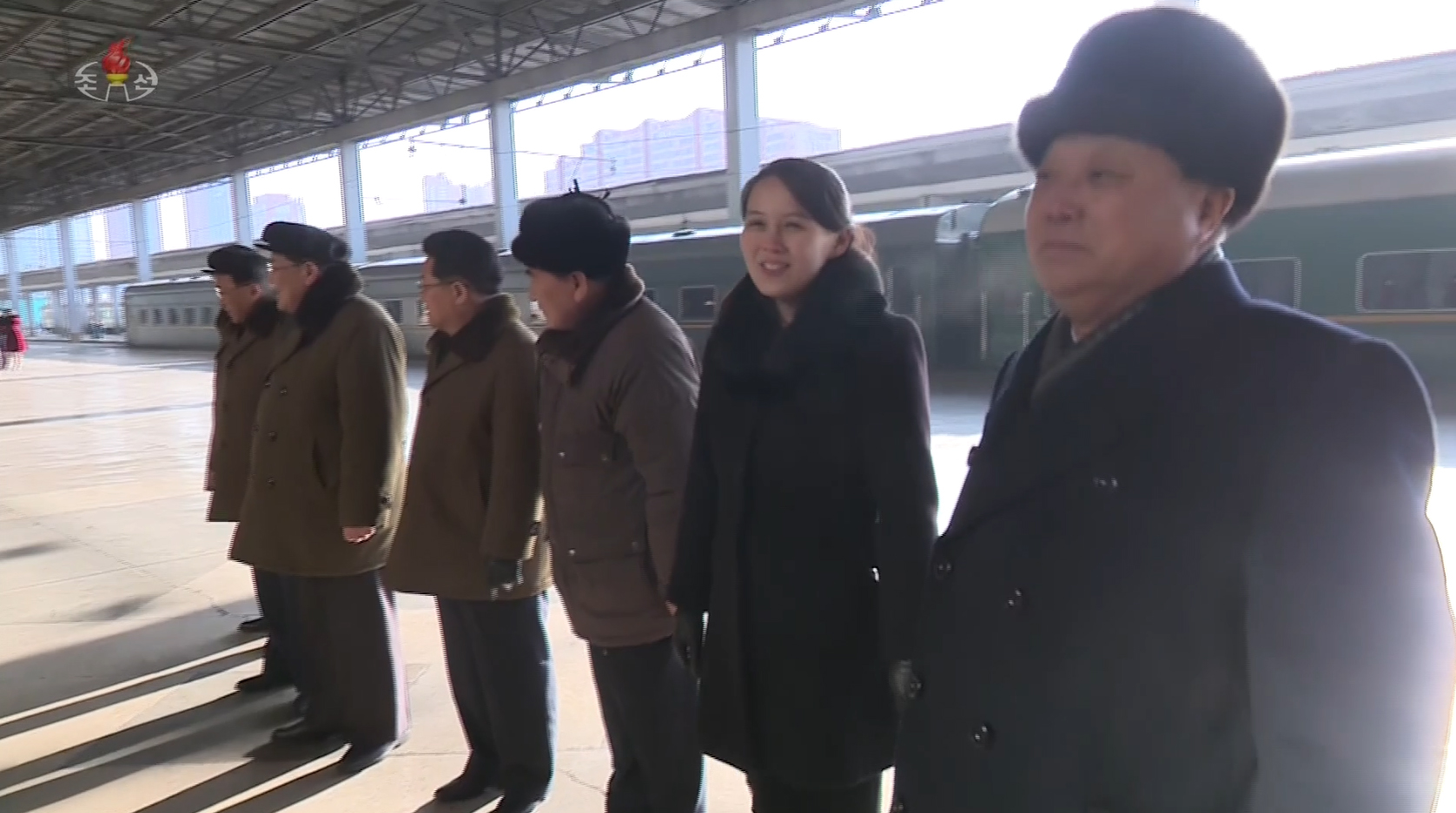 Kim Yo-jong, second from right, sees off a North Korean art troupe departing for South Korea with other North Korean ranking officials, broadcasted on the North's state media on Tuesday.[YONHAP]

After participating in the PyeongChang Winter Olympics opening ceremony Friday night, the delegation will have a lunch with President Moon Jae-in on Saturday, said the Blue House.

The 23-member delegation will return home Sunday evening on the same private plane from Incheon International Airport, Pyongyang informed Seoul through the Panmunjom hotline on Thursday afternoon, according to the Unification Ministry.

The plane will return to the North tomorrow after dropping off the delegation and fly back Sunday to pick it up. It is unclear whether the private plane used by the delegation is Kim Jong-un’s own plane, an issue that Pyongyang did not explain to Seoul.

Kim Jong-un's private plane isn't sanctioned by Seoul or Washington, but the state-run carrier Air Koryo is blacklisted by the United States.

North Korea's high-level delegation will be led by Kim Yong-nam, president of the Presidium of the Supreme People's Assembly, North Korea's rubber-stamp legislature, and technically head of state. Other members include Kim Yo-jong, the younger sister of Kim Jong-un, who serves as first vice-director of the Central Committee within the ruling Workers' Party; Choe Hwi, chairman of the National Sports Guidance Committee; Ri Son-gwon, chairman of the Committee of the Peaceful Reunification of the Country of the Democratic People's Republic of Korea; three reporters; and 16 support staff.

Local authorities are hoping Kim Yo-jong, the closest person to Kim Jong-un in the North Korean regime, might bring a personal message from her brother, which would be the closest thing so far to a one-on-one discussion between South Korean President Moon Jae-in and Kim Jong-un.

Other details of the delegation's itinerary weren't mentioned by the Blue House nor the Unification Ministry Thursday. Consultations were still ongoing between Seoul and Pyongyang on the itinerary, the ministry said.

Choe Hwi is a sore spot for Seoul because he's blacklisted by Washington for human rights abuses and censorship. He is also covered by United Nations Security Council sanctions that invoke a travel ban.

Reuters reported Thursday that the South Korean mission in the UN has asked the UN Security Council's North Korea sanctions committee for an exemption to allow Choe to travel, writing in a formal request that the delegation's visit "will serve as a timely opportunity to reduce tensions on the Korean Peninsula and beyond by promoting an environment conductive to a peaceful, diplomatic and political solution concerning the situation on the Peninsula."

Choe will be granted an exemption if no objection is raised by any of the 15 UN Security Council members by 5 a.m. tomorrow, Seoul time.

Seoul is also discussing Kim Yo-jong with Washington because she was blacklisted by the United States in January 2017 over human rights abuses and censorship.

The Unification Ministry said discussions were still ongoing as to whether Seoul would provide fuel to the North's Mangyongbong-92 ferry, the ship that carried the Samjiyon Orchestra to Mukho Port in Donghae, Gangwon, last Tuesday, a request made by Pyongyang.

Offering the North any refined petroleum product is tricky because the UN Security Council allows the regime to import no more than 500,000 barrels of it a year. The South did, however, provide free water for the ship’s crew, a senior government official said.