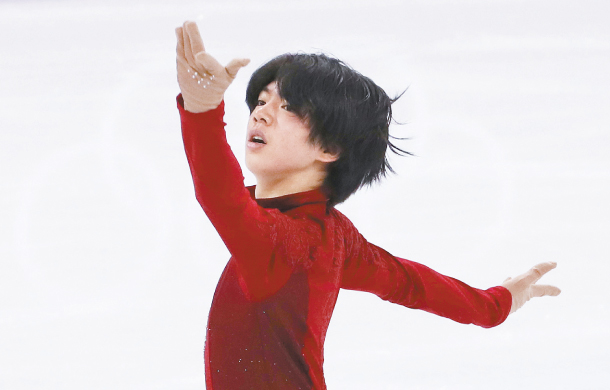 Cha Jun-hwan performs his short program during the men’s singles portion of the team event at Gangneung Ice Arena in Gangwon on Friday. [YONHAP]

Gangneung Ice Arena, Gangwon, saw its first flips and twirls Friday as the figure skating program kicked off with the start of the team event. 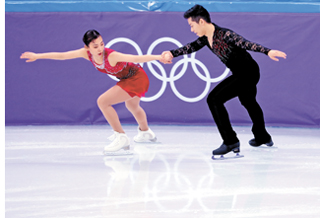 Ten countries are competing in the team event in Pyeongchang with the men’s singles and pair events held on Friday.

Cha Jun-hwan made his Olympic debut in the men’s single event, receiving his season best score of 77.70. He performed a clean short program to “Gypsy Dance,” ranking sixth.

Cha’s personal best score in the short program is 82.34, set at the International Skating Union (ISU) World Junior Championship in March, 2017. Cha was the first of the ten skaters competing in the men’s singles short program to perform as he is ranked the lowest at 56.

Despite his season best score, Cha was not satisfied. After the performance he told reporters, “My jumps and speed wasn’t as good as when I trained in Toronto. It wasn’t great when I practiced in the morning but I was able to finish well with the support of the crowd.”

However, Cha’s coach Brian Oser was satisfied with his debut, as he skated a clean performance in front of such a big crowd.

“This is a big competition. He had only one senior competition before this, which was a small one. It was a real test to see how he will manage this,” said Oser. “But it was his first performance. He handled that really well. I’m really proud of him.”

Alex Kang-chan Kam and Kim Kyu-eun performed their short program in the pair event, ranking last with a score of 52.10. As they placed at the bottom of the pack, they only added a point to the total score.

“There were little mistakes like touching the ice with my hand while landing after my jumps,” Kim said. “But I’m still satisfied with the performance at my first Olympics.”

“Hearing the fans’ cheers and big applause helped a lot,” Kam said. “My right [injured] shoulder is not at 100 percent, but it doesn’t affect my performance.”

After the first day of the team event, Korea is ranked ninth with six points. Points are awarded based on the ranking at the end of each event, with the top ranked team receiving ten points and the bottom team receiving only one point.

The skaters were joined on Friday in the kiss and cry zone - the area to the side of the rink where skaters wait to see their results - by other members of the Korean team. Ice dancers Min Yu-ra and Alexander Gamelin and ladies’ singles skaters Choi Da-bin and Kim Ha-nul turned out with flags to support their teammates.

“Everyone felt like a family,” Kim Kyu-eun said. “I wouldn’t have had a chance to experience this if it wasn’t the Olympics.”

With the first day completed, Canada leads the event with 17 points, three points ahead of the United States.

The team event will continue tomorrow with ice dance and ladies single performing their short program and the pairs returning to the ice to perform their free skate.