The singular beauty of inter-Korean uniforms

The singular beauty of inter-Korean uniforms 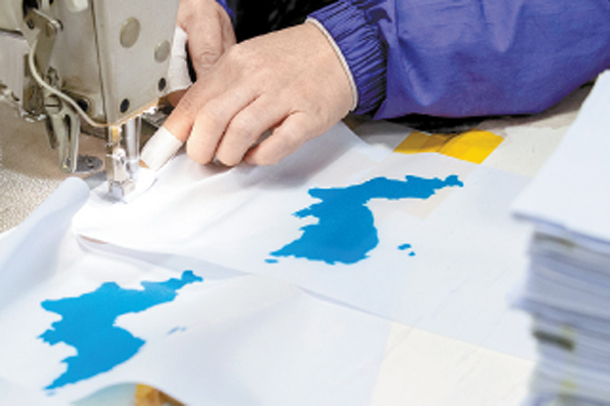 The Korea Unification flag will be used for the entrance of the two Koreas in the 2018 PyeongChang Olympics and also for the joint female ice hockey team. [YONHAP]

Perhaps one of the biggest attractions at the 2018 PyeongChang Winter Olympics is the inter-Korean women’s ice hockey team, which marks the first ever joint Olympic team in the divided Koreas’ history. But the sudden decision to form the squad has caused trouble regarding their uniforms. The team will not be competing with their individual countries’ flags on their uniforms, but with the Korea Unification flag, a white flag with the shape of the Korean peninsula in blue.

While the team already has these jerseys, since the decision to make a joint team was hastily made, it is still waiting for their Unification flag patches to arrive, which will be sewn onto the uniforms over their chests. These patches may not arrive before Feb. 10, when they have their match against Switzerland, and according to some, the exact design of the patch has not been finalized. Part of the reason for the delay involves a complaint raised by Japan regarding the fact that the flag on the team’s uniforms includes the disputed Dokdo islets.

Ice hockey teams usually only wear uniforms designed by Nike, as determined by the International Ice Hockey Federation, but this year the joint team is the sole exception. The reason for this is unclear, but the team’s new outfit was designed by the Finnish brand Tackla. For the opening ceremony, the team will also have the abbreviation “COR” on the back of their uniforms. Rather than using “KOR” for Korea or “DPRK” for the Democratic People’s Republic of Korea, also known as North Korea, the uniforms will read “COR” after Coree, a name that used to refer to the Korean peninsula some centuries ago during the Goryeo Kingdom (918-1392).

The Korea Unification flag goes back to 1991, when it made its first appearance during the 41st World Table Tennis Championships. The color blue was chosen as a comprise by a third party since the two nations couldn’t agree on one. The South wanted green, symbolizing peace, while the North wanted brown, to symbolize Korea’s agricultural history.