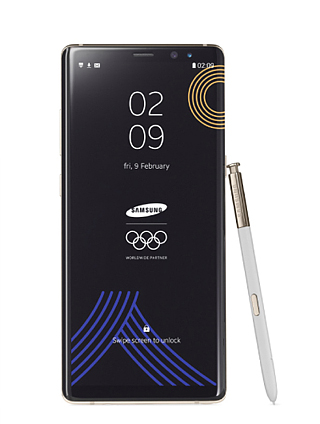 Iran has rejected the International Olympic Committee’s decision to allow its athletes to take away the Olympic edition of the Samsung Galaxy Note8, the latest escalation in a diplomatic row over the IOC’s earlier decision to block the Iranian team from receiving the limited edition phone.

Iran’s ambassador to Seoul Mohammad Hossein Taherian told the country’s state-run Islamic Republic News Agency (IRNA) on Friday that Iranian athletes have rejected the offer of the Olympic phone created by Samsung Electronics. The athletes have instead sent a letter of protest to the organizing committee asking for an apology.

The IOC had announced earlier Friday that it has decided to allow athletes from Iran and North Korea to receive the Olympic edition of the Samsung Galaxy Note8 after the Iranian government summoned the South Korean envoy to Tehran to lodge a formal complaint.

The Olympic organizing committee confirmed that a representative met with the head of the Iranian team to deliver a note of apology from Lee Hee-beom, president of the committee, at 5 p.m.

It is not clear whether the Iranian authorities were aware of the apology when they rejected the IOC’s offer.

Samsung, an official worldwide partner of the Games, had prepared some 4,000 Olympic editions of the Galaxy Note8 phone to give to participating athletes as well as IOC staff. However, the IOC decided that the phones could not be given to Iranian and North Korean athletes due to United Nations sanctions imposed on the two countries.

Under United Nations Security Council sanctions, the sale of luxury items and electronics with a potential dual use - commercial and military - to North Korea is banned. The phablet, which normally has a nearly $1,000 price tag, could be considered a dual use luxury item.

As for Iran, while nuclear sanctions on the country were lifted in 2016, a number of sanctions still remain in place. Uncertainty over the restrictions left the Olympic organizers wary of giving the Iranian athletes the free phablets.

Bahram Qasemi, a spokesman from Iran’s Foreign Ministry, described the IOC’s decision as an “unethical move that is opposed to the spirit of [the] Olympic Games,” according to the IRNA on Thursday.

The IOC has decided to give the North Korean athletes the phones, but only for the duration of the Games.

It is likely that the North Korean team’s leaders declined the offer on behalf of the whole team.