Hoping for a good year? Try a woodblock print : In time with Olympics, Gangwon museum opens up its collection of sehwa

Hoping for a good year? Try a woodblock print : In time with Olympics, Gangwon museum opens up its collection of sehwa 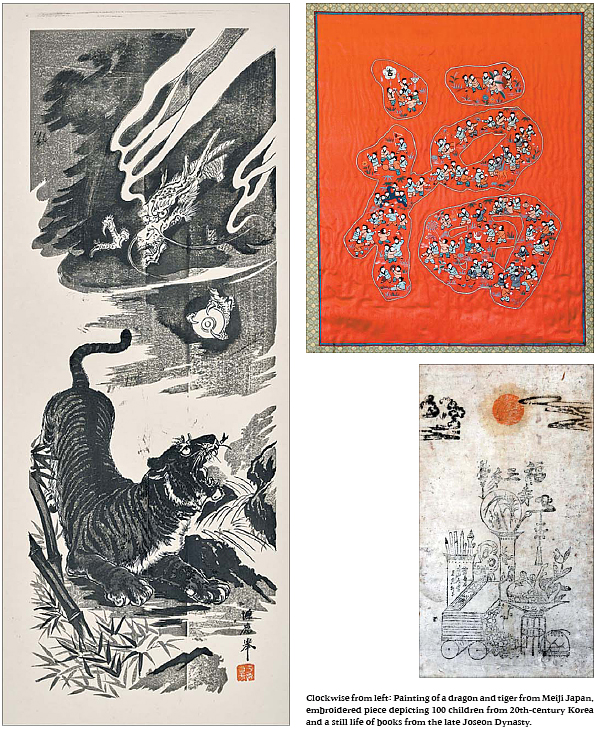 An old Lunar New Year tradition involves hanging illustrations around the house to wish for good luck and ward off negative energy.

These pictures, known as sehwa in Korean, are a dying breed. Though fewer families practice the custom as in the past, the tradition endures in the rarefied halls of the museum.

On Friday, the Museum of Ancient Asian Woodblock Prints in Wonju, Gangwon, opened a special exhibition on sehwa that shows prints from China, Japan, Korea and Vietnam.

The exhibition is timed with the Olympics since Gangwon is the province where Pyeongchang, the host of the Winter Games, is located.

Of the 50 pieces on display, 10 are showing in Korea for the first time.

One of the few Korean rarities on display is a piece of embroidery showing 100 children immersed in play. Their animated figures are distributed across the canvas to form the Chinese character for luck.

Another unique offering at the exhibition are two chaekgeori prints made from wooden blocks. These trompe-l’oeil still lifes depicted bookshelves - hence the name chaekgeori, literally “drawings of books” - and were popular during the Joseon Dynasty (1392-1910).

Top: “Carp staring at the moon” from Vietnam. Below: “God of wealth into the treasure” from late Qing China. [MUSEUM OF ANCIENT ASIAN WOODBLOCK PRINTS]

“In Korea, such colored woodblock prints were hardly produced because the illustrations were not commercialized,” Han Seon-hak, director of the museum, said. “However, in other Asian countries, such as Vietnam, they were actively circulated in the market, which is why they are so colorful and florescent as opposed to the simple, almost no use of color in Korea.”

Along with style comparisons, the exhibition explores the different ways in which the four countries relate to the tiger, one of the mascots of the Winter Olympics.

In East Asia, the tiger has traditionally been regarded as a sacred animal, a guardian that can ward off evil spirits, though each culture has adopted its own perspectives and ideas on the animal.

Japanese depictions of the tiger stand out for their unusually realistic appearance. One Meiji-era painting comes close to the real thing, unusual when one considers the country is naturally devoid of the wild beast.

“Since Japanese artists did not have the opportunity to see the animal with their own eyes, they gathered as many descriptions of it as they could and drew the animals in a much more realistic way,” Han said, “ironically depicting more authentic tigers than in other East Asian countries where tigers did populate.”

The prints on display are all owned by the director. Han himself travels around the world in his spare time to collect rare woodblock prints and other old works.

“They are my pride, these prints,” Han said. “With the beginning of the Olympics, not only domestic but international audience can also visit the museum and have the opportunity to look closely at different cultural aspects that make each country distinct from one another instead of just categorizing the four countries as ‘East Asia.’”

The Museum of Ancient Asian Woodblock Prints is located at the Myeongju Temple complex in Wonju, Gangwon, and can be reached by local bus number 24 or 25. Get off at Moolan Station, and walk about 700 meters (half a mile).

The sehwa exhibition runs through June 3.