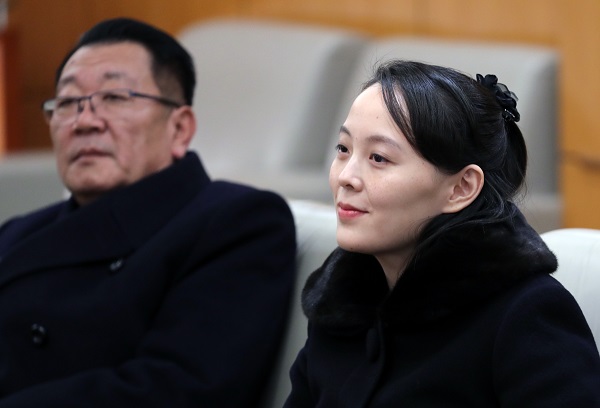 The delegation, led by Kim Yong-nam, president of the Presidium of the Supreme People’s Assembly, arrived at Incheon International Airport around 1:46 p.m. using a private jet of the North Korean leader. South Korean Unification Minister Cho Myoung-gyon welcomed the group, the highest ranking North Koreans to ever visit South Korea, at the airport.

Kim Yo-jong serves as first vice director of the Central Committee within the ruling Workers’ Party. She is the first member of the North Korea’s ruling family to visit the South. She is a grand-daughter of Kim Il Sung, the late founder of the communist regime.

The plane departed Sunan International Airport in the North Korean capital city of Pyongyang. It first flew to the Yellow Sea and then entered South Korean airspace.

It is the first time since August 2014 that the North used the air route between Pyongyang and Incheon. At that time, a delegation to the closing ceremony of the Incheon Asian Games traveled via that route.

After a brief immigration process and a welcome from Minister Cho, the group headed to Pyeongchang, Gangwon, where the opening ceremony of the Olympic Games will take place tonight. They used a KTX bullet train for the trip.

The group will attend the Olympic opening ceremony tonight. President Moon Jae-in will host a luncheon for the delegates on Saturday and they will return to the North on Sunday.

After South Korea informed the UN Security Council about the delegation’s travel plans, it made a decision by consensus to allow Choe’s trip.

The Security Council sanctioned Choe last June 2 when he was vice director of the Workers’ Party of the Korea Propaganda and Agitation Department. Kim Yo-jong now serves in that position.

The U.S. Treasury Department placed her on a blacklist last year, but she is not subject to UN sanctions.