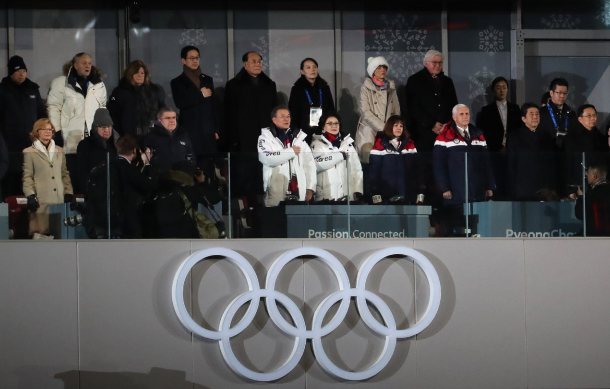 The 2018 PyeongChang Winter Olympics kicked off with a blaze of high-tech effects highlighting national pride at an opening ceremony at the PyeongChang Olympic Stadium in Gangwon on Friday, gathering together over 2,900 athletes from 92 different places.

Under the theme of “Peace in Motion,” the opening ceremony had a storyline of five children exploring Korea’s history and culture.

After an opening performance filled with stunning special effects, world leaders, business leaders and some royalty were introduced. Following the VIPs’ introductions, the national flag was carried onto the stage by the Olympic champions, as well as Pak Se-ri, World Golf Hall of Famer who coached the women’s golf team at the 2016 Rio Olympics, before the national anthem was played. 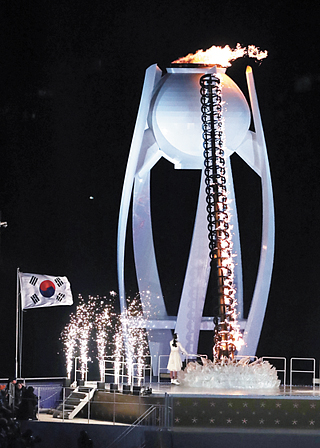 When the inter-Korean team came out under the tune of “Arirang,” it received a standing ovation from President Moon Jae-in and the first lady, as well as the North Korean delegation. The flagbearers were South Korean bobsledder Won Yun-jong and North Korean ice hockey player Hwang Chung-gum, who will compete on the joint women’s ice hockey team.
In stadium seats, North Korea’s cheerleading squad waved the unification flag. Koreans in the audience were teary-eyed.

Since the 2000 Sydney Summer Olympics, this was the 11th time North and South Korea walked into an opening ceremony of an international event together. The last time was at the 2007 Asian Games in Changchun, China. The 2000 Sydney Summer Olympics was the last time the two Koreas walked in together at the Olympics.
Aside from Greece and the two Koreas, the other 90 nations walked into the stadium in alphabetical order using the Korean alphabet, hangul.

North and South Korean taekwondo athletes held a joint performance at the Olympic Stadium as part of a pre-opening ceremony, which started at 7 p.m. Taekwondo is a Summer Olympic sport.

The 2018 PyeongChang Winter Olympics, under the slogan of “Passion, Connected,” will be the largest Winter Olympics in history with 2,925 athletes from 92 nations participating in 15 sports.
It will offer a record 102 gold medals, 70 for snow events and 32 for ice events.

Prior to the opening ceremony, the torch relay completed its 101-day domestic journey, with IOC President Thomas Bach being the one of the torchbearers on the last day. After running about 200 meters (656 feet), Bach passed the flame to Miroslv Lajack, president of the 72nd session of the United Nations General Assembly.

Starting from Pyeongchang County Office, the torch ran 133.4 kilometers before its arrival at the Olympic Stadium Friday night.

The Olympic torch arrived at Incheon International Airport on Nov. 1, for the first time since the 1988 Seoul Olympics, from Greece. Lighting the Olympic flame in 17 different cities, a total of 7,500 torchbearers have run a total of 2,018 kilometers.

“From the support of the people, the 2018 PyeongChang Olympic torch has successfully completed its 101-day journey and will now light the Pyeongchang Olympic Stadium for the next 17 days,” said Lee. “Now that the Games have begun, I hope people from around the world enjoy the winter festival in Pyeongchang, Gangneung and Jeongseon.”

Ending the ceremony, speeches were made by the presidents of the International Olympic Committee and PyeongChang Organizing Committee for the 2018 Olympic and Paralympic Winter Games.

Once the flame arrived at the PyeongChang Olympic Stadium, it was paraded by a succession of athletes. A pair of players from the joint women’s ice hockey team — one from the South and one from the North — passed the torch to Kim Yuna, who won gold at the 2010 Vancouver Winter Olympics and silver at the 2014 Sochi Winter Olympics. She lit the cauldron at the top of the stadium.