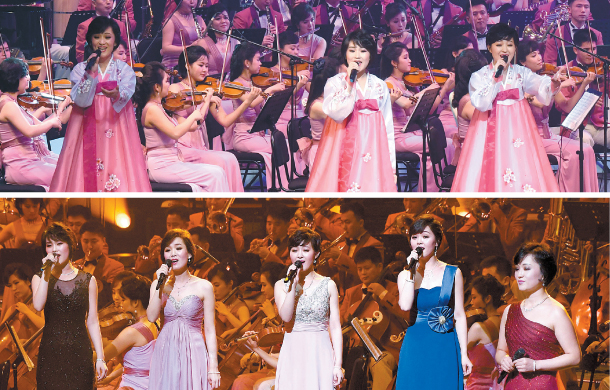 North Korea’s Samjiyon Orchestra performs at the Gangneung Arts Center in Gangwon Thursday night on the eve of the Olympics. Its second and last concert will be held tomorrow at the National Theater of Korea in Jung District, central Seoul. [YONHAP]

GANGNEUNG, Gangwon - After days of wrangling with Seoul over its playlist, North Korea’s Samjiyon Orchestra held the first of two planned concerts in South Korea on Thursday night at the Gangneung Arts Center in Gangwon, assuaging local jitters that it might blast propaganda music.

The orchestra played 45 songs, including an encore, for about an hour and a half to a crowd of some 800 people, including several hundreds who were chosen by an online lottery. Eleven South Korean songs were played, mostly trot music from several decades ago.

The South Korean government was known to have taken issue with two songs the orchestra planned to perform during the concert, accusing them of featuring socialist lyrics. One folk song, titled “Moranbong,” included the line “Our Pyongyang is so nice, socialism is so nice.” The other controversial song, “Paektu and Halla Are My Home,” featured a line about unification under the North Korean regime.

The Samjiyon Orchestra eventually dropped the first song from the Gangneung concert entirely and only played the melody of the second song, without singing the lyrics.

The South Korean songs that were performed included “To J” and “Maze of Love,” sung by local artists who actually sang the songs in 2002 and 2003 during a special concert in Pyongyang, the North’s capital, as well as “The Day The Sun Will Rise” and “Cha-Cha-Cha Everyone.” Several world classics were also performed, including Mozart’s “Turkish March.”

Unification Minister Cho Myoung-gyon, who was among the audience members, thanked the orchestra for playing several songs familiar to the South Korean crowd, saying the team had “earnestly prepared many songs over a short period.”

“When they played South Korean songs,” said Kim Dong-gil, 65, who came with his wife from Yangyang County, Gangwon, “I clapped and sang along. I think everyone was pretty sad the concert had already ended when they played the last song, ‘Let’s Meet Again.’”

A source from the Gangneung Arts Center who spoke with Hyon Song-wol, the leader of the Samjiyon Orchestra who made a two-day visit last month to South Korea in order to choose the concert venues, said Hyon complimented Gangneung’s coffee on Thursday and said she had missed it when she returned home.

A South Korean government official said Hyon seemed nervous ahead of the concert and asked for an iron to smoothen the performers’ stage outfits. “I heard it was her first time holding a concert in South Korea, so I think she was anxious, especially with all the attention and expectation from the crowd.”

The Samjiyon Orchestra will hold its second and last concert tomorrow in Seoul at the National Theater of Korea in Jung District, central Seoul, before travelling back to the North on Monday. The group arrived at Mukho Port in Donghae, Gangwon, last Tuesday on the North Korean ferry Mangyongbong-92. The Unification Ministry said Friday evening that Pyongyang rescinded its fuel request for the vessel.