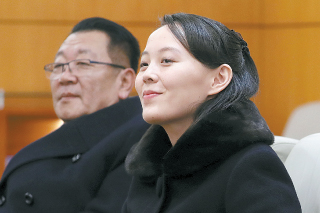 Kim Yo-jong, the younger sister of North Korean leader Kim Jong-un, landed in South Korea Friday afternoon as a member of a high-level delegation to the Winter Olympic Games.

The delegation, led by Kim Yong-nam, president of the Presidium of the Supreme People’s Assembly, arrived at Incheon International Airport around 1:46 p.m. using a private jet of the North Korean leader.

Kim Yo-jong serves as first vice-director of the Central Committee within the ruling Workers’ Party. She is the first member of North Korea’s ruling dynasty to visit South Korea. She is a granddaughter of Kim Il Sung, the late founder of the communist regime.

The plane departed Sunan International Airport in the North Korean capital city of Pyongyang. It first flew to the Yellow Sea and then entered South Korean airspace.

It is the first time since August 2014 that North Korea used the air route between Pyongyang and Incheon. At that time, a delegation to the closing ceremony of the Incheon Asian Games traveled via the route.

After a brief immigration process, four top members of the North Korean delegation, including Kim Yo-jong and Kim Yong-nam, sat down for a 20-minute talk with South Korean officials including Minister Cho.

“The weather was very cold until a few days ago, but it turned warm to accommodate precious guests from the North,” Cho said.

Following the meeting, the group headed to Gangneung, Gangwon Province, where a welcome reception before the opening ceremony of the Olympic Games took place in the evening. They used a KTX bullet train for the trip.

Kim Yong-nam, the ceremonial head of the North, was the only member of the North Korean delegation invited to the reception for foreign leaders, hosted by President Moon Jae-in. Kim Yo-jong did not attend.

The delegation attended the opening ceremony. Moon will host a luncheon for the delegates on Saturday and they will return to the North on Sunday.

It remains to be seen if Kim Yo-jong will deliver a message to Moon from her brother concerning inter-Korean relations and North Korea-U.S. relations.

“If the North requests a response to take to Pyongyang, we may have an additional meeting to give an answer,” a Blue House official said.

Speculation was high that Kim Yo-jong will deliver a message to Moon from Kim Jong-un on an inter-Korean summit. Former Unification Minister Chung Sye-hyun told CBS radio on Friday that the only purpose of Kim Yo-jong’s trip to the South is delivering a message from her brother.

He said the message will likely be a response to Moon’s remarks on an inter-Korean summit in a New Year’s press conference. “Because we talked about it, the North is making a response,” Chung said.

Moon has said he is willing to have an inter-Korean summit if it is necessary to improve relations between the two Koreas and resolve the nuclear crisis. He, however, made clear that an outcome should be guaranteed.

Earlier in the morning, the United Nations Security Council granted approval for Choe to travel with the delegation.

Choe was the only member of the delegation sanctioned by the UN and subject to a UN travel ban.