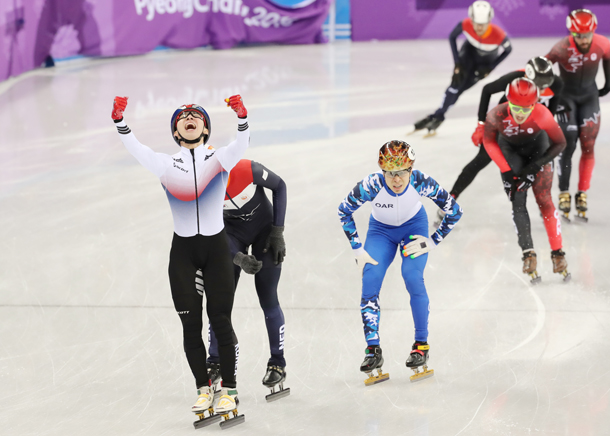 The 21-year-old first-time Olympian set a record at the Games, finishing the race in 2 minutes and 10.485 seconds at the Gangneung Ice Arena. His victory was all the more remarkable considering he has gone through seven surgeries in his relatively short career so far.

After winning gold in his first International Skating Union World Cup race of the season, Lim had to miss the second and third races due to a back injury.

He returned to the ice at the fourth World Cup race in November, which took place in Seoul, but he still had not fully recovered.

His gold medal is a stellar comeback not just for himself but also the men’s short-track team, which finished the last Winter Games at Sochi without any medals.

From the outset, Lim was not the favorite to win. It was Hwang Dae-heon, the other Korean in the final race, who held the odds based on his performance in previous heats.

But on his third to last lap, Hwang’s left blade got stuck in the ice, causing him to trip when he attempted to cross his right leg over. Hwang lost his balance and slid into the wall. Defeated, he got up and failed to finish.

Lim took the lead, surpassing Sjinkie Knegt of the Netherlands.

In women’s short-track speed skating, the Korean team finished first in the 3,000-meter relay heat, securing their berth in the final medal race.

The relay team comprising Shim Suk-hee, Choi Min-jeong, Kim Ye-jin and Lee Yu-bin raced in heat 1 along with Canada, the Olympic Athletes from Russia and Hungary. They finished in 4 minutes and 6.387 seconds, an Olympic record - until China finished first in heat 2 with a record of 4 minutes and 5.315 seconds, setting up a tough final for Korea.

There was quite a bit of nail-biting drama in the Koreans’ race when Lee fell on the ice with 23 laps still remaining. The error set the Korean women nearly a full lap behind other teams, but the four skaters managed to catch up in dramatic fashion. With 12 laps remaining, they managed to move up to third.

Three laps later, they were in the lead.

In addition to her performance in women’s relay, Choi set a new Olympic record in the women’s 500-meter event with her time of 42.870 seconds in a heat race. She will advance to the finals.

The other two Koreans in the race - Shim and Kim A-lang - failed to advance to the quarterfinals, finishing third in their heats.