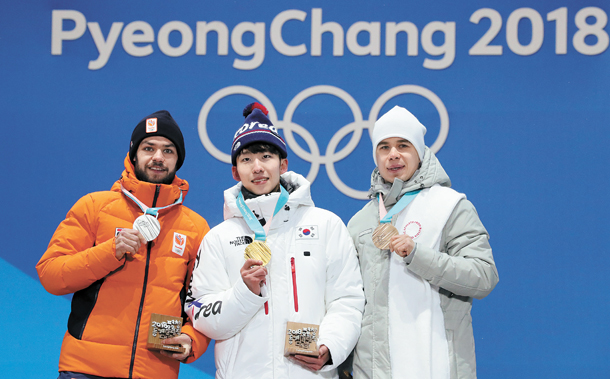 From left, Sjinkie Knegt of the Netherlands, Lim Hyo-jun of Korea and Semen Elistratov, an Olympic athlete from Russia, during the medal ceremony for the men’s 1,500-meter speed skating event in Pyeongchang County, Gangwon, on Sunday. [YONHAP]

Short-track speed skater Lim Hyo-jun, Korea’s first gold medalist at the PyeongChang Winter Olympics, battled injuries throughout his relatively short career to get to the podium. 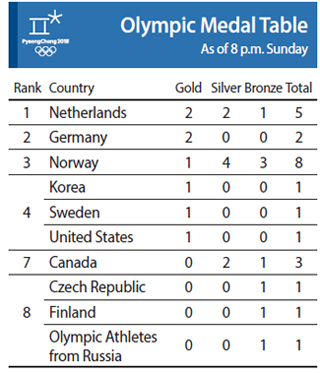 The 21-year-old first-time Olympian set a record in the men’s 1,500-meter event on Saturday, finishing the race in 2 minutes and 10.485 seconds at the Gangneung Ice Arena in Gangwon. His victory was all the more remarkable considering he has gone through seven surgeries for broken bones.

From the outset, Lim was not the favorite to win. It was Hwang Dae-heon, the other Korean in the final race, who held the odds based on his performance in previous heats.

But on his third to last lap, Hwang’s left blade got stuck in the ice, causing him to trip when he attempted to cross his right leg over. He slid into the wall and failed to recover.

While Hwang bowed out of the race, Lim took the lead, surpassing Sjinkie Knegt of the Netherlands.

“When there was only one lap remaining, I was first in the group,” Lim said. “I started to think that I can win if I finish like this so I raced as fast as I could. I told the head coach that I felt like I could do something if I got to the final and it really happened. It is a lot more meaningful because this is also Korea’s first gold.”

Lim started his athletic career as a swimmer, but after rupturing his eardrum at age 8, he switched to short-track speed skating. He demonstrated a knack for the sport early on, winning domestic competitions when he was just 10.

However, his career afterward has been plagued by continuous injuries. In seventh grade, he had to leave the sport for a year and a half due to a broken shin bone. When he returned to the ice, Lim moved to Seoul from his hometown of Daegu to improve his skating.

But Lim’s career once again faltered from injuries. Throughout his time in high school, he broke his ankle, wrist, back and shin.

By the time he was 20, he had gone through seven surgeries.

Despite the obstacles, Lim finished first in the national team qualifying event in April 2017 and won gold at the first International Skating Union World Cup race of the season that September.

His streak didn’t last long, as Lim had to miss the second and third races due to a back injury.

He returned to the ice at the fourth World Cup race in November in Seoul, but he still had not fully recovered.

“I have finally won gold on the stage I’ve been dreaming of,” Lim said. “Although I won gold, this was done by the 16 Team Korea skaters. I didn’t win because I was good. I got here because I had my teammates.”

Korea is traditionally strong in short-track, with 11 out of 28 gold medals coming from men’s short-track events. But the team put on a disappointing performance at the last Winter Games, finishing with no medals at Sochi.

Prior to the Olympics, Kim Sun-tae, head coach of the Korean short-track team, said, “Just like how Pyeongchang got to host the Winter Olympics in its third attempt, the men’s short-track team will make a comeback in PyeongChang.”

Kim expected the comeback to be made in the 1,500-meter race. Lim fulfilled that goal.

In women’s short-track speed skating, the Korean team finished first in the 3,000-meter relay heat, securing their berth in the final medal race.

The relay team comprising Shim Suk-hee, Choi Min-jeong, Kim Ye-jin and Lee Yu-bin raced in heat 1 along with Canada, the Olympic Athletes from Russia and Hungary. They finished in 4 minutes and 6.387 seconds, an Olympic record - until China finished first in heat 2 with a record of 4 minutes and 5.315 seconds.

The Korean team might have produced a faster time if Lee had not fallen on the ice with 23 laps still remaining. The error set the Korean women nearly a full lap behind other teams, but the four skaters managed to catch up in dramatic fashion. With 12 laps remaining, they managed to move up to third.

Three laps later, they were in the lead.

In addition to her performance in the women’s relay, Choi set a new Olympic record in the women’s 500-meter event with her time of 42.870 seconds in a heat race. She will advance to the finals.

The other two Koreans in the race - Shim and Kim A-lang - failed to advance to the quarterfinals, finishing third in their heats.