Korea hoped for another surprise medal from Lee Seung-hoon, but came up short of a podium appearance, after the long track speed skater finished fifth in the men’s 5,000-meter race with a time of 6 minutes and 14.15 seconds at the Gangneung Oval in Gangwon on Sunday. 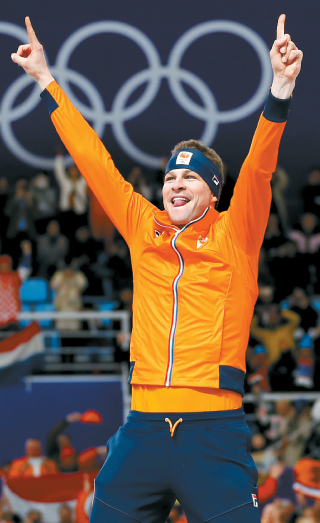 Sven Kramer of the Netherlands celebrates after winning the men’s 5,000-meter race at the Gangneung Oval in Gangwon on Sunday. [YONHAP]

Though Lee’s time was a lot slower than his personal best of 6 minutes and 07.04 seconds, he was happy with his performance.

“I am satisfied,” Lee said. “I set a goal to finish around 6 minutes and 15 to 16 seconds. My final spurt was better than I expected and I was able to have a better record thanks to support from the fans.”

Rather than losing his pace towards the end of the race, Lee sped up in the last five laps by maintaining his lap time below 30 seconds. Lee held on to the lead until the seventh race, when Peter Michael of Australia beat Lee’s time by 0.08 seconds.


Sven Kramer of the Netherlands successfully defended his title for the third consecutive Olympics, setting another Olympic record with a time of 6 minutes and 09.76 seconds. Kramer was dominant, finishing 1.85 seconds ahead of silver medalist, Ted-Jan Bloemen of Canada, the world record holder. Sverre Lunder Pedersen of Norway won bronze, finishing the race in 6 minutes and 11.618 seconds.

With the victory, Kramer became the first male speed skater to defend his title in the same event for three consecutive Olympics. 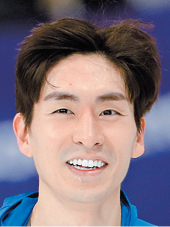 Kim Bo-reum, who earned her spot in the women’s 3,000-meter race at the last minute, finished 18th with a time of 4 minutes and 12.79 seconds. Kim’s race was considered a disappointment as her time was nowhere close to her best time of the season, 4 minutes and 04.44 seconds.

Originally, Kim was scheduled to only compete in women’s mass start and the team pursuit race, but after an Olympic Athlete from Russia forfeited her spot at the last minute, Kim was given an opportunity to participate in the women’s 3,000-meter race.

“Last year, I raced the women’s 3,000-meter race here, so I wanted to have a time similar to that record,” Kim said.

“But [my time] wasn’t as good as I wanted it to be. Since the mass [start] is the important race, I consider this to be good training. The 3,000-meter race is different from mass start. I think I’ll be fine.”