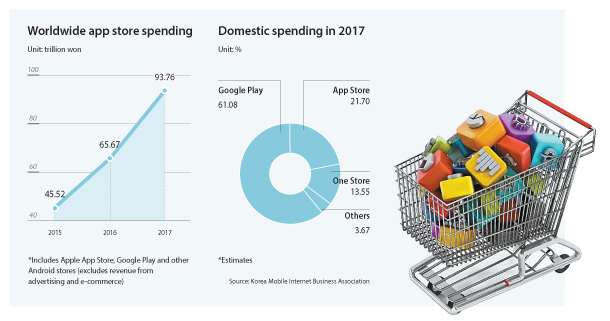 The ubiquity of smartphones and the obsession with now can warp our sense of time, so much so that many forget it’s only been 10 years since the first market for apps, the Apple App Store, opened to the public.

It was the same year the stock market crashed, Lehman Brothers filed for bankruptcy and Barack Obama was elected president.

In the decade since, apps have become integral parts of our daily lives, with smartphones as their conduit. The number of apps sold on Apple’s App Store was 2.2 million in July last year, according to market research firm Statista, up from 3,000 in July 2008, the month it opened.

The number of apps sold on Google Play, the main Android store, surpassed 3.5 million last December, up from 16,000 in December 2009, about a year after it opened.

A study by App Annie, an analytics firm, showed there were 17.5 million app downloads worldwide last year, and customers spent a combined $8.6 million on both app stores, double the size from 2015.

Koreans were particularly big spenders in terms of in-app purchases for games, according to App Annie. The country’s video game-obsessed population spent the third-largest amount on Google Play and fifth-largest in the Apple store.

In Korea, the home turf of Samsung Electronics, whose phones run on Google Android, Google Play is more powerful than the Apple App Store. Propped up by the popularity of Samsung’s Galaxy smartphones, Android’s market share in the mobile app market stands at over 80 percent here.

The Google Play store ranks apps based on revenue and popularity in 36 categories. The “customized recommendation” section also shows apps that are relevant to the user’s past history of app downloads. Last July, Google added a curated “editor’s choice” section. With its iOS 11 update last September, Apple, too, launched a section with apps that match users’ tastes. Being featured in any of these prominent pages is akin to winning the lottery for app developers.

Kim Young-ho, CEO of Malang Studio, was one of the lucky ones. His AlarmMon app, which requires users to play mini games with cute characters to turn an alarm off, was featured on Google Play Store’s main page.

“After Google noticed our promotional activities in Taiwan, they exposed it worldwide on their global Google Play, helping us enter overseas markets,” he said. “It was downloaded 27 million times, with 70 percent of the downloads made abroad.”

Koreans spend trillions of won on apps in Apple and Google’s stores each year. Last year, Koreans spent an estimated 5.33 trillion won ($4.9 billion) on Google Play, and the market’s size is expected to hit 7 trillion won this year, according to the Korea Mobile Internet Business Association, which represents the country’s major tech companies.

Much of that spending is on in-app items, making them a lucrative source of revenue for developers. However, many users have found ways to get around paying for them. One loophole is Apple’s byzantine refund system, where users can request a refund from Apple for an in-app item. However, developers say Apple does not share that information with them, meaning users could continue using in-app items even after receiving a refund.

“This is a problem that can be solved if Apple releases user refund records, but it will not budge even though people have brought the issue up for many years,” said one Korean game developer who requested anonymity. “Because we have to get on Apple’s good side, as it dictates the rules of the market, we can’t even complain.”

App developers take 70 percent of the revenue from app and in-app purchases; Apple and Google keep the remaining 30 percent. At Google Korea, half of that amount is given to Korean telecom companies and the rest to Google’s Asia-Pacific operations.

“We spend the earnings on running the app market stably and growing the app development ecosystem,” a Google Korea spokeswoman said.

However, Google does not release figures on its precise earnings from the Korean app market.

In an effort to encourage developers to stay on its platform, Google Play in January reduced the commission it receives on app sales from 30 percent to 15 percent, but only on apps in which users pay for a subscription and maintain their subscription for at least a year. Apple implemented a similar measure in 2016.

Tech industry watchers say such measures won’t really have a visible impact on the local app market, given more than 90 percent of app revenue in Korea comes from games and their revenue largely relies on payment for in-app items rather than subscriptions.

“Thanks to the global app market, it’s true that small developers now have an opportunity to expand abroad,” said Cha Jae-pil, policy head at the Korea Internet Corporations Association, which represents the country’s major tech companies. “But Korea has been unable to tax the app market even though it’s exponentially growing every year. In the ecosystem of apps, domestic businesses are far from the leading force.”