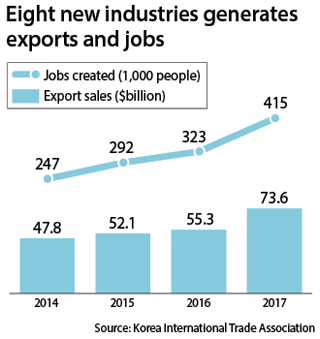 Eight emerging industries, including robots and electric cars, generated $73.6 billion in sales from exports and around 415,000 jobs last year, a report from the Korea International Trade Association said Sunday.

These eight are among 12 “new industries” selected by the government in late 2016 to lead the so-called fourth industrial revolution. From the list, the trade promotion agency selected eight for which export figures are available: electric cars, robots, bio health, aerospace, new energy sources, advanced materials, OLED displays and semiconductors.

The association’s Institute for International Trade analyzed data between 2014 and 2017 and found that exports in the eight industries grew an average 15.5 percent annually, expanding their combined pie of entire exports to 12.8 percent last year from 8.3 percent four years ago.

Electric car exports nearly tripled last year from the previous year, at a rate of 186.8 percent. The remaining seven all recorded double-digit growth rates between 10 and 40 percent.

The industries’ growth was reflected in the number of jobs they produced each year. Last year, they created 415,000 new positions at manufacturers and small component suppliers, a 28.5 percent increase from the previous year.

The report also analyzed Korea’s competence in each sector by comparing export and import figures. Korea turned out to have high competence in OLED displays, advanced materials and new energy technology but was relatively weak in bio health and aerospace.

Semiconductor took up 62.3 of all exports across eight sectors, placing it at No. 1. The data showed that dependence on this single product has slowly gone down from 67.7 percent in 2014 as technologies in the other seven industries have seen advancements over the years.

The trade association noted that more efforts should be made to diversify exports. The report also mentioned China as a growing competitor in these fields.

China is currently Korea’s largest trading partner in the eight industries with a 28 percent share, but its progress in technological development has weakened Korea’s relative competence in some sectors including displays and robots.

While the Korea International Trade Association suggested that heavy dependence on the Chinese market was a task to overcome in the long run, it also pointed out that expanding partnership with the world’s largest market can create good opportunities.