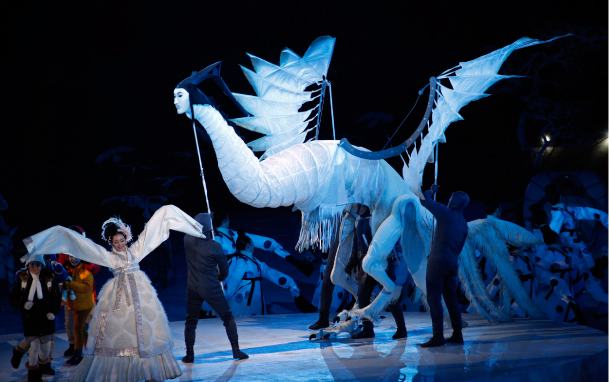 Dancers perform during the opening ceremony of the 2018 Winter Olympics in Pyeongchang, Gangwon, Friday. [AP/YONHAP]

The PyeongChang Olympic opening ceremony in Gangwon had no shortage of moments that made both spectators and those watching at home say “Wow.” Kim Yuna’s poised, graceful cauldron lighting, Tonga’s topless flagbearer and a handful of mesmerizing pieces combining cutting-edge technology and human performance.

But from these memorable instances, one is drawing the most obsessive reaction over social media and across the internet for its striking, unforgettable look: The “Inmyeonjo,” which translates as “human-faced bird,” a massive puppet of a mythical bird with a face of a man transplanted on its head.

The fantastical beast comes from ancient Korean Goguryeo mythology. The PyeongChang organizing committee called it “the legendary bird of peace” and “the mediator between heaven and earth.” Controlled by four people, the Inmyeonjo puppet appeared during an early segment of the ceremony, titled “The Vision of Peace in the Sky.”

From its clunky, awkward movements at the ceremony to its deadpan, expressionless face, the bird became a hot topic Friday, spawning a slew of endearing internet memes, ranging from meticulously drawn fan arts, comics strips paying homage to the bird as a guardian creature, to a gimbap, or Korean rice roll, dish inspired by the Inmyeonjo. Even a parody Twitter handle, @myeonzo, was created.

The bird also become the most searched item on Naver and other major web portals, surpassing even Kim Yuna.

Reactions were mostly positive, with some even asking the Olympic organizing committee to produce Inmyeonjo merchandise for sale.

“The opening ceremony was excellent. We got to show the world the deep cultural heritage,” Twitter user @bohemianatchina wrote. “Imagine a foreigner who watched the opening ceremony researching about the Inmyeonjo. [They] will be meeting the Korean Peninsula from 2,000 years ago,” the user added.

Bae Il-hwan, an art director at the PyeongChang Olympics opening ceremony team who designed the puppet, wrote on Twitter, “I’m surprised by the unexpected reaction. Thank you so much for loving my creation.”