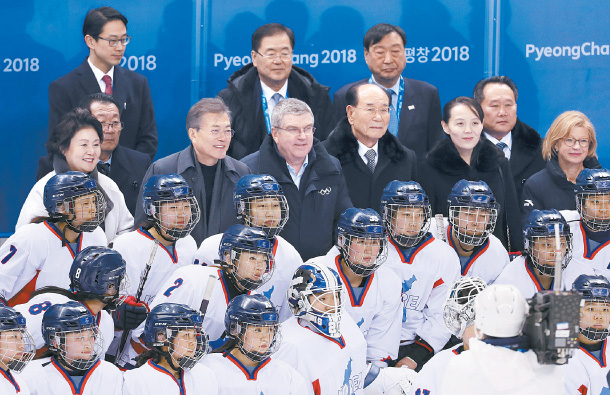 From left in first row behind the athletes, Kim Jung-sook, first lady of South Korea; Moon Jae-in, president of South Korea; Thomas Bach, president of the International Olympic Committee; Kim Yong-nam, president of North Korea’s Presidium of the Supreme People’s Assembly; and Kim Yo-jong, the sister of North Korean leader Kim Jong-un and first vice director of the Central Committee within the Workers’ Party, gather for a group photo on Saturday in Gangneung, Gangwon, after the inter-Korean women’s ice hockey team’s match against Switzerland. [YONHAP]

North Korean leader Kim Jong-un’s invitation to South Korean President Moon Jae-in for a summit in Pyongyang - relayed on Saturday by Kim’s sister - represents an olive branch to Seoul after a year of escalating tensions and could be a breakthrough in Moon’s North Korea policy that values dialogue with the reclusive state.

But it will also put Moon’s arbitration ability to the test as he finds himself caught between his desire to engage with Kim Jong-un and the United States’ continued stance that North Korea ought to face tougher pressure and harsher sanctions. Losing either side could lead to catastrophic consequences, analysts say.

“By now, the United States will be cautiously gauging whether the improvement of North-South relations will be helpful in getting North Korea to denuclearize,” said Kim Yong-hyun, a professor of North Korean studies at Dongguk University in Seoul.

For the South, “it’s imperative to convince Washington that the improvement of inter-Korean ties is a detour to achieving North Korea’s denuclearization, not going in the opposite direction from it.”

Officials in the Moon administration believe Kim Jong-un’s invitation for a summit has been highly calculated, according to one source, since it is the first known time he has ever invited a foreign leader to a summit.

The last time that the leaders of North and South Korea met for a summit was in 2007, when Moon’s mentor, President Roh Moo-hyun, met with Kim Jong-un’s father, Kim Jong-il.

The source said Moon’s government has been preparing for an inter-Korean summit since early this year after picking up positive cues from Kim Jong-un’s New Year’s speech on Jan. 1. “We should improve the frozen inter-Korean relations,” Kim said in his address, “and glorify this meaningful year as an eventful one noteworthy in the history of the nation.”

It became clear Kim Jong-un was keen on engagement when North Korea accepted South Korea’s offer of a high-level meeting between officials that same week. The meeting, the first in over two years, led to the North’s participation in the PyeongChang Winter Olympics.

The conciliatory mood stands in stark contrast to last year, when Seoul offered to hold military talks and discussions for a reunion of families separated by the 1950-53 Korean War, only to be completely ignored.

Yet, even after Kim Jong-un’s sister, Kim Yo-jong, verbally conveyed her brother’s message to Moon on Saturday, Moon refrained from accepting the invitation in a knee-jerk response, suggesting that Seoul and Pyongyang “create the environment for that to be able to happen,” according to his spokesman, Kim Eui-kyeom.

Moon was quoted as telling Kim Jong-un’s sister that, “For the sake of improving relations between the two Koreas, it’s absolutely necessary for the North and the United States to talk soon,” encouraging Pyongyang to “try more actively” to seek dialogue with Washington.

Kim Yo-jong, who arrived in South Korea last Friday as part of a 23-member high-level delegation for the Olympics, was described to have “listened carefully” as Moon relayed his reply.

But underlying Moon’s cryptic response - and his hesitance to seize the chance of direct talks with Kim Jong-un - is a suspicious United States. The Trump administration has consistently rejected any talks with North Korea unless the regime shows genuine efforts to give up its nuclear arsenal.

U.S. Vice President Mike Pence, who flew into South Korea last week to participate in the opening ceremony of the Winter Olympics, used every opportunity of his visit to highlight the North’s atrocities by meeting with North Korean defectors and visiting a memorial site for the Cheonan warship, which North Korea torpedoed in March 2010, killing 46 sailors on board.

During the opening ceremony Friday night, Pence and his wife were seated directly in front of Kim Yo-jong in the VIP box, but the couple made no eye contact with Kim, staring fixedly ahead.

A senior U.S. administration official told reporters Saturday that Pence wasn’t trying to avoid North Korea officials in attendance - he was just trying to ignore them, according to a Reuters report.

“There is no daylight between the United States, the Republic of Korea and Japan on the need to continue to isolate North Korea economically and diplomatically until they abandon their nuclear and ballistic missile program,” Pence reportedly told journalists during a flight back to the United States on Saturday night, stressing that Washington, Seoul and Tokyo were in complete agreement on isolating the North over its nuclear stockpile.

Pence and Moon did not specifically discuss North Korea’s summit invitation when they sat side-by-side Saturday evening to watch a speed skating match in Gangneung, Gangwon, the official said, though Moon shared with him “details” of his meeting with the North Korean delegation.

Moon and Pence were also said to have discussed intensifying sanctions on the North during the game.

North Korea watchers say it could be that Kim Jong-un was taking a chance at diplomacy to lift tough sanctions imposed on his regime. Kim may also be growing more anxious about a possible pre-emptive attack from the United States as the Trump administration continues to raise the option.

“North Korea claims to have mastered its nuclear force,” said Chon Hyun-joon, a visiting professor in the Department of Military Security at Wooksuk University in Wanju County, North Jeolla, “but it’s still terrified of any military action from the United States.”

A retired South Korean government official said the North was so entangled in international sanctions that when the country announced it would send a delegation to the Winter Games, Seoul had to wrap its head around travel routes and accommodations to make sure none violated UN Security Council resolutions.

“When Kim Jong-un rose to power, he told his people that they no longer would have to tighten their belts,” the former South Korean government official said. “But things are getting tougher, so for him, it’s like [the invitation to Moon] was making a winning move.”

The North Korean delegation was scheduled to fly back to Pyongyang on Sunday, departing from the same private plane owned by Kim Jong-un used to arrive to South Korea.

The delegation, which arrived Friday afternoon, was led by Kim Yong-nam, president of the Presidium of the Supreme People’s Assembly, North Korea’s rubber-stamp legislature, and technically head of state.

Before their departure, the delegation also planned to watch North Korea’s Samjiyon Orchestra concert in Seoul with Moon and his wife, First Lady Kim Jung-sook.