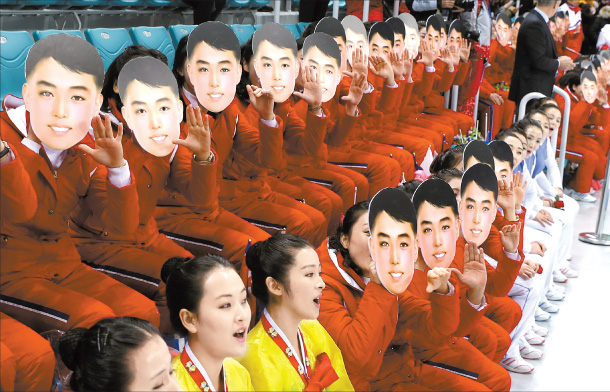 North Korean cheerleaders root for the inter-Korean women’s ice hockey team during their match against Switzerland on Saturday in Gangneung, Gangwon. The masks they used were mistaken as the visage of a young Kim Il Sung, North Korea’s founder. [YONHAP]

North Korea’s cheerleading squad inadvertently sparked a fracas between opposing South Korean lawmakers over the weekend when the cheerleaders used masks depicting a Korean man during the inter-Korean ice hockey team’s match against Switzerland on Saturday.

Some conservative lawmakers complained that the masks resembled Kim Il Sung, the founder of North Korea. The South’s Unification Ministry quickly issued a statement on Sunday rebutting a viral news report that the masks depicted Kim.

“The media report that said, ‘The North Korean cheerleading squad is wearing masks of Kim Il Sung,’ made a false assumption,” the statement said. “The ministry has confirmed with a North Korean official on site that the team did not intend any of what the reporter assumed and that the North cannot do such a thing.”

Instead, the masks were used by the mostly female cheerleaders to sing the male part of a popular song, the statement said.

No Cut News, a news agency run by South Korea’s Christian Broadcasting System, reported on Saturday that the North Korean cheerleading squad was wearing masks that looked like the North Korean leader in his younger days during the women’s ice hockey game.

The reporter has since told other media outlets that the report was a mistake, and it has been deleted from No Cut News’ website but not before causing a ruckus among South Korean lawmakers.

“They must think this is the Pyongyang Olympics,” Rep. Ha Tae-keung, a member of the opposition Bareun Party, wrote on his Twitter account Saturday. “They must think nothing of the South Korean president to wear Kim Il Sung masks.”

Opposition parties in South Korea have been denouncing the Moon Jae-in administration for allowing North Korea to participate in the PyeongChang Winter Olympics, deriding the event as the “Pyongyang Olympics” and calling it a propaganda opportunity for North Korean leader Kim Jong-un, the grandson of Kim Il Sung.

Representative Ha said the South Korean government should demand an apology from Kim Yo-jong, the sister of Kim Jong-un who is attending the Olympics on behalf of her brother.

Kim Yo-jong is a member of the North’s high-level delegation to the Winter Games. She serves as first vice director of the Central Committee within the ruling Workers’ Party and is the first member of North Korea’s ruling family to visit South Korea.

“Respect for the regime and leadership is very much emphasized in North Korea,” Yang Moo-jin, a professor of the University of North Korean Studies, told Yonhap News Agency. “I don’t think the country would ever think of making masks from the face of its founder and using them for the cheering squad.”

“Don’t be fooled, this is fake news,” Kim Bin, a spokesman for the Democratic Party wrote on his Twitter account Sunday. “The news spread so quickly even though it was published in the middle of the night through Twitter by Rep. Ha and others. Those involved in spreading the fake news must apologize officially.”