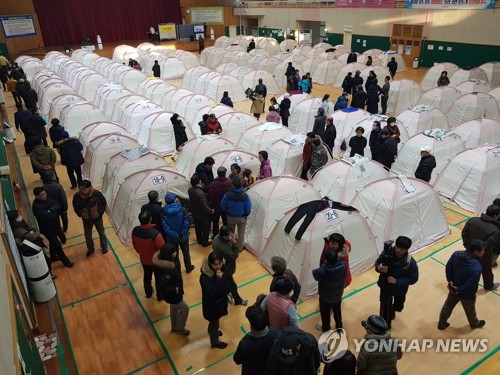 A 4.6-magnitude earthquake struck the southeastern city of Pohang on Sunday, three months after the city was hit by the country's second-strongest quake on record. Four people sustained light injuries, officials said.

The quake happened 5 km northwest of the city's northern district office at a depth of 14 km at 5:03 a.m., and is believed to be an aftershock of November's 5.4-magnitude quake, according to the Korea Meteorological Administration.

Since the Nov. 15 quake, a total of 84 aftershocks have occurred in the city, and Sunday's is the strongest of them. The second-strongest aftershock, with a magnitude of 4.3, occurred on the day the main quake struck, KMA officials said.

Sunday's quake was felt in many parts of the country, as far as Seoul, with about 1,400 calls received at fire stations. The tremors also sent frightened residents in Pohang evacuating their homes to safer places, like schoolyards and other open spaces.

"I heard a bang while sleeping, and my apartment shook," said a 45-year-old resident who identified himself only by his surname Lee. "A lot of things dropped and I suspected the quake must have been stronger than the Nov. 15 quake."

Four people have been injured in the wake of the quake, but all of them were non-life threatening, officials said. One of them, a student of Pohang University of Science and Technology, sustained an injury to the head when he fell while running to evacuate out of a school building, officials said.

Emergency services in the city reported 16 cases of damages as of 6 a.m., with efforts being made to assess exact extent of the quake. Pohang municipal authorities said they are inspecting buildings throughout the city to check for serious damage.

POSCO, South Korea's largest steelmaker, which has its main mill in the city, said its operations have not been disrupted, while Korea Hydro & Nuclear Power Co. (KHNP), the country's atomic energy operator, said none of its nuclear plants have been affected.

The KHNP added that no damage has been reported at the nearby nuclear waste repository.