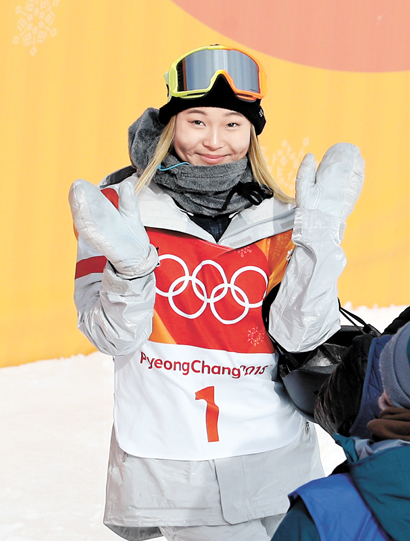 Chloe Kim of the United States waits for the score after competing in the women’s halfpipe qualifying run at the PyeongChang Winter Olympics at Phoenix Snow Park in Pyeongchang, Gangwon, on Monday. [YONHAP]

Chloe Kim of the United States made a successful Olympic debut in the snowboard halfpipe qualification run at Pheonix Snow Park in Pyeongchang, Gangwon, on Monday. 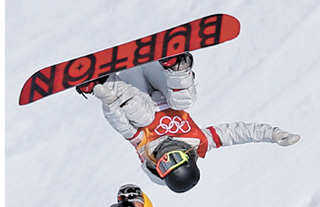 The top-ranked Kim cruised through the qualification run, scoring a 95.50 in her second qualifying run. Being the first female halfpipe snowboarder to receive a perfect score of 100 after landing back-to-back 1080s, Kim received significant attention worldwide even before competing in the event.

She and Shaun White of the United States are the only snowboarders to have ever received a score of 100.

Kim responded to the high expectations, finishing first in both qualification runs. By receiving a score of 91.50 in the first run, which excludes the highest and the lowest score, Kim was the first to guarantee her spot in the finals.

Though Kim had a successful showing in the first run, it seemed as if it was just a warm-up for the 17 year old, who scored an even higher score in the second run. By receiving a score of 95.50 points, Kim easily finished first in the qualification, 7.75 points ahead of runner-up Liu Jiayu of China. Kim was the only snowboarder in the field of 24 to received a score of 90 points or higher in the qualification.

“I’m always more nervous on qualifiers, so tomorrow, I think I can really focus on what I want to do,” Kim said after the qualification runs. “The pipes have been so good. I’m so thankful that the condition has been amazing. I’ve been really trying to clean up all the little details and I think I just did that, so I’m really excited.”

Having started snowboarding at age 4, Kim started competed at age 6. Despite not participating at the 2014 Sochi Olympics due to the age limit, Kim’s name has been continuously mentioned as the most likely snowboarder to win gold in PyeongChang. She won four golds at the Winter X Games in the women’s superpipe and two golds at the 2016 Winter Youth Olympics, both in halfpipe and slope-style. Kim is still the only athlete in the history of the X Games to win the event three consecutive times before the age of 16.

Aside from Kim, Kelly Clark of the United States, who is making her fifth Winter Olympics appearance, and Cai Wuetong of China, who won the 2017 World Championship, also advanced to the finals.

Kwon Sun-oo, the only Korean female halfpipe snowboarder, failed to qualify to the finals. Kwon received a score of 19.25 points in the first run, as she had an unsuccessful landing after a 720-degree jump. Kwon did better on the second run, receiving 35.00 points, but it wasn’t enough to finish in the top 12, placing her 20th out of 24 snowboarders.

The final round, which comprises three runs, will start today at 10 a.m. The best score from the three runs will be counted toward the final standings.