Quick reads for first-time visitors : Books offer an inside look at the unique parts of Korean culture and Gangwon province

Quick reads for first-time visitors : Books offer an inside look at the unique parts of Korean culture and Gangwon province 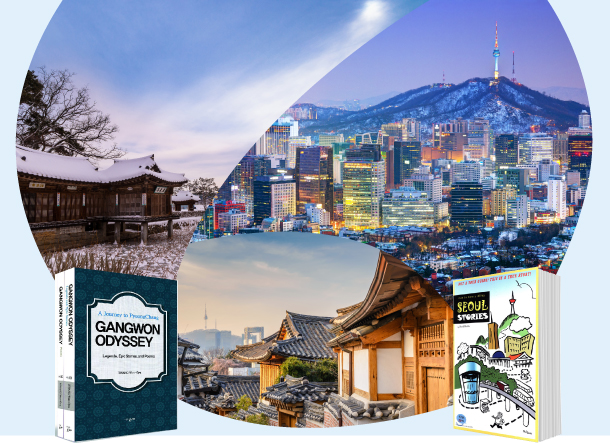 Living like a local during a short trip overseas is a fantasy many international travelers have these days. But those in Korea may find themselves wondering about little things they may find as they walk around. For example: Why are there eggs on top of the counter at Korean style spas called jjimjilbang or why do pavilions seem to be randomly placed along hiking trails in the mountains?

For travelers who don’t have much time to research the unique local culture or history of Korea as they head to the 2018 PyeongChang Winter Olympics, there are many books that answer their questions.

When David Ritchie first came to Korea in 1995, the egg situation stood out as especially unique. Wherever he went, there were eggs - at convenience stores, at Korean spas and even on the backseat of a motorcycle.

“It makes juggling a chainsaw look easy by comparison,” Ritchie said in his book “Fun in Every Alley, Seoul Stories.”

The book is an updated version of “10 Million Tigers,” a book that the author, who has also done consultation work for the Korea Tourism Organization, published right before the 2002 Korea-Japan World Cup. As the first page of the book says, this is “not a tour guide! This is a true story.”

Ritchie also talks about yo, a thin mattress you put on the floor to sleep on instead of on a bed, in the book. He describes it as a magnet to keep you on the floor, calling the phenomenon the “yo effect,” and details how hard it is for him to get up and go about his day after sleeping on the floor.

The book also gives readers insight into traditional pillows found in Korea, which have grain husks inside of them. Ritchie describes the sound of putting your head down on the pillow “like wind through the trees,” and explains how comfortable and relaxing it can be once you get used to it.

While Ritchie points out unique things that one can find in Korea in a humorous tone, professor of economics Hwang Won-gyu from Gangneung-Wonju National University takes a more serious approach in his book, “Gangwon Odyssey.” He focuses on areas in Gangwon, where the Olympics are currently being held, and the history and literary works of the area.

The book is separated into two parts - myths and handed-down stories of the region, and poems by scholars who have spent time in the province.

The region is surrounded by breathtaking landscapes hidden amongst mountain ranges, and thanks to its dramatic topography, the area has been able to maintain its unique culture and scenery, according to the professor.

Gangneung, home to some of the Olympic events, is known for its unique landscape, which was “praised as being first class” in ancient literature during the Joseon Dynasty (1392-1910), Hwang said. “The river embraces the wind from a long distance,” reads a line from the Joseon-era scholar Yi Yi (1536-1584), which is included in the book by Hwang to show how people in the past spent a lot of time appreciating nature and recording memories of their exploration of the local environment.

The book also includes stories behind historic places in Gangwon and photos to help readers understand their significance.

Curious about the statues and pagodas that stand near Woljeong Temple, one of the most well-known Buddhist temples in the area?

The book describes how the Nine-story Octagonal Pagoda is considered one of the finest Buddhist artworks of the Goryeo period (918-1392) and that the famous Bowing Stone statue is there to show people’s devotion to their religion.