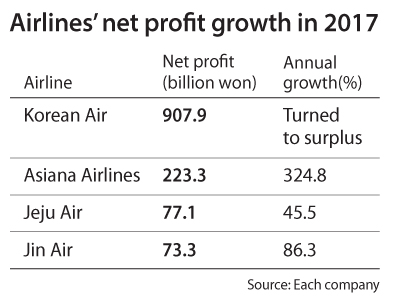 Last year turned out to be a profitable one for Korean airlines despite a tourism ban from China that significantly reduced the number of visitors to the country.

Operating profit fell 11.4 percent to 956.2 billion won, but gains from currency exchange boosted the company’s net profit to a record 907.9 billion won, a turnaround from a 591.4 billion won net loss the previous year.

The company also attributed net profit growth to an increasing number of Koreans traveling abroad and a substantial boost from memory chips being shipped by air.

Korean Air’s debt-to-equity ratio declined from 1,274 percent at the end of 2016 to 542 percent last year. Based on the improved financial footing, the company promised dividend payouts to its shareholders for the first time in seven years. They will receive 250 won per common stock and 300 won per preferred stock.

Rival carrier Asiana Airlines showed the highest net profit since 2011 last year despite its large dependence on Chinese customers. The company has been diversifying its destinations, adding long-haul routes to the United States, Europe and Oceania.

Both companies are expecting favorable growth in the passenger carrier market as air traffic has been busy thanks to the PyeongChang Winter Olympics being held in Korea.

The top player, Jeju Air, made over 100 billion won in operating profit last year, the first among LCCs in the country to surpass the figure. It is paying out dividends of 600 won per share, even higher than Korean Air.