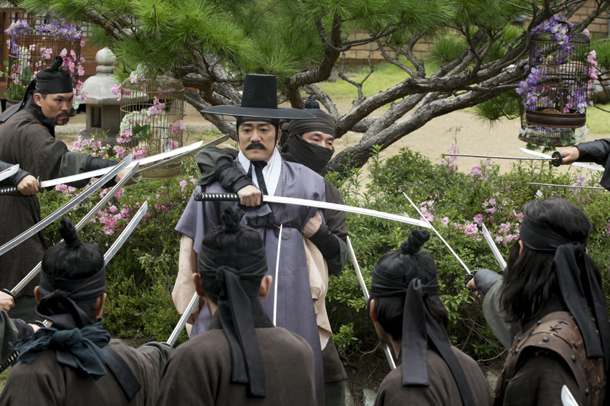 “Detective K: Secret of the Living Dead,” the third in the franchise starring Kim Myung-min and Oh Dal-su, clinched the top spot in its debut weekend.[SHOWBOX]


There weren’t many big changes at the Korean weekend box office this week, except for the fact that the third film in the “Detective K” franchise took the first spot and “Psychokinesis,” last week’s top-grossing film, dropped all the way down to ninth.

Directed by Kim Seok-yun, and starring Kim Myung-min and Oh Dal-su, “Detective K: Secret of the Living Dead” dominated the weekend box office by selling 786,000 tickets at 1,246 screens from Friday to Sunday.

Revolving around a detective (Kim) and his sidekick (Oh), who work together to discover who is behind a series of mysterious deaths, the film accounted for 48.1 percent of the entire weekend’s ticket sales.

Set in the Joseon Dynasty (1392-1910), the movie co-stars Kim Ji-won as the duo’s female partner who has the strength of Hercules but struggles with her memory.

The second, third and fifth-ranked films at the box went to comedy drama “Keys to the Heart,” Disney-Pixar’s heartwarming coming-of-age animated tale “Coco” and the fantasy drama “Along with the Gods: The Two Worlds.”

In fourth place was “Paddington 2,” which debuted this weekend. The film revolves around a brown bear named Paddington who picks up a series of odd jobs to buy the perfect present for his aunt’s birthday.

Followed by the commercial failure of highly anticipated movies last month like “Psychokinesis,” relatively older films like “Along with the Gods” and “Keys to the Heart” managed to stay atop the box office over the past few weekends.

However, a major shift is expected to be seen at the box office next weekend, thanks to the upcoming flood of new movies arriving just in time for the Lunar New Year holidays which begin on Thursday.

Some of the highly-anticipated films coming out this week are Marvel’s “Black Panther,” the crime drama “Golden Slumber” and period epic “Heung-boo: The Revolutionist.”