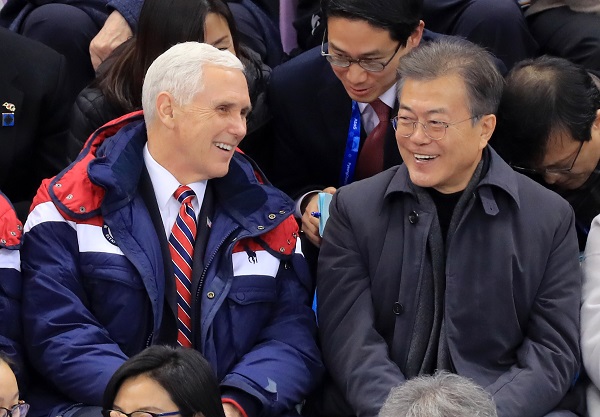 U.S. Vice President Mike Pence indicated that he and President Moon Jae-in came to some agreement behind the scenes that could lead to direct talks without preconditions between Washington and Pyongyang after the Winter Olympics.

Pence maintained a hardline stance on the North during his visit to Japan and South Korea, but the Washington Post reported Sunday that based on assurances by President Moon, the vice president felt confident Washington could endorse post-Olympics engagement with Pyongyang.

Interviewed aboard Air Force Two after wrapping up his Asia trip, Pence said that through substantive conversations with Moon during this trip, the United States and South Korea agreed on terms for further engagement with the North, first initiated by South Korea and then shortly after by the United States.

“The point is, no pressure comes off until they are actually doing something that the alliance believes represents a meaningful step toward denuclearization,” Pence was quoted as saying by the newspaper. “So the maximum pressure campaign is going to continue and intensify. But if you want to talk, we’ll talk.”

Pence called this a “maximum pressure and engagement at the same time” approach, which appears to be a significant shift from the Trump administration’s stance of maintaining a maximum pressure campaign on North Korea, and only making direct engagement when the regime showed serious indications that it would denuclearize.

This window of opportunity came as North Korean leader Kim Jong-un extended an invitation to President Moon Jae-in to a summit in Pyongyang through his younger sister, Kim Yo-jong, on Saturday, during her visit to the South for the PyeongChang Winter Olympics.

Pence avoided interaction with the North Korean delegation during several possible encounters such as at a pre-Olympics reception for state leaders and dignitaries and in a VIP box at the Games, in which both Kim Yo-jong and Kim Yong-nam, North Korean ceremonial head of state and president of the Presidium of the Supreme People’s Assembly, were seated almost directly behind him during Friday’s opening ceremony.

The Moon and Trump administrations were seen to have some differences in views on engagement with North Korea leading up to Pence’s visit to the South for the Olympics. Pence, who has emphasized keeping North Korea from “hijacking” the message of the Olympics, announced Washington would roll out even tougher new sanctions on Pyongyang during a stop in Tokyo last Wednesday, further dimming prospects of rapprochement with the North.

But Pence and Moon were said to have worked out their differences in meetings at the Blue House Thursday and as they viewed speed skating heats in the Gangneung Ice Arena in Gangwon Saturday, according to this report.

Moon was said to have assured Pence he would tell the North Koreans clearly that they would not get economic or diplomatic concessions for talking for the sake of talking, and only for taking concrete steps toward denuclearization, which enabled Pence to feel confident he could endorse engagement with Pyongyang. Pence was said to have been in communication with President Donald Trump every day throughout his Asia visit.

“I think it is different from the last 20 years,” Pence told the Post, though he did not indicate what steps North Korea would have to take to get sanctions lifted, explaining, “That’s why you have to have talks.”

U.S. Secretary of State Rex Tillerson has on several occasions before indicated that he is open to talks without preconditions with North Korea, including a proposal of: “Let’s just meet,” in a speech at the Washington-based think tank Atlantic Council last December.

U.S. Defense Secretary Jim Mattis, however, remained cautious and said Sunday it is “too early to tell” whether the discussions between President Moon and Kim Yo-jong, first vice-director of the Central Committee within the North’s ruling Workers’ Party, were a good early sign about tensions easing.

Mattis pointed to North Korea’s military parade on Thursday, which showcased the regime’s ballistic missiles a day before the Olympics opening ceremony.

“I know that people are watching for a wedge between South Korea … and the United States,” Mattis told reporters en route to Rome. “There’s no wedge there.”

He said the two countries’ military staffs are “integrated,” adding he recently met with South Korean Defense Minister Song Young-moo in Hawaii, showing they were on the same page on the political level as well.

“We are in close contact with the Republic of Korea about our unified response to North Korea, including the need to maintain pressure to achieve a denuclearized Korean Peninsula,” a U.S. National Security Council spokesperson told the JoongAng Ilbo Sunday.

“President Moon has called for setting the right circumstances for a meeting,” the spokesperson said, adding that Seoul and Washington will “work together to ensure that the North-South progress is accompanied by advances toward denuclearization.”

“The international community should support [North and South Korea] in improving their relations and carrying on the current momentum of amelioration in the situation on the peninsula,” Lu Kang, spokesman of the Chinese Foreign Ministry, told reporters Saturday. “China stands ready to work with the U.S. to maintain communication and coordination on the basis of mutual trust and mutual respect and jointly promote the proper settlement of the peninsula issue.”