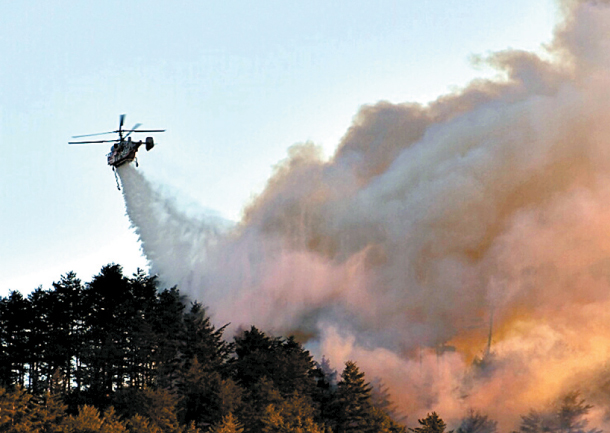 Helicopters put out wildfires in Samcheok, Gangwon, early Monday after a blaze broke out the previous day, burning through over 30 hectares (74 acres) of land. [YONHAP]

Authorities in Gangwon dispatched some 34 helicopters, 45 firetrucks and over 1,700 firefighters to fight wildfires at two locations in Samcheok on Monday morning that burned through over 30 hectares (74 acres) of land since Sunday afternoon.

“The Korea Forest Service intends to put out the fire within the afternoon,” said the national forestry agency in its statement on Monday. “We have assigned some 720 people overnight to fight the fires and an additional 1,700 firefighters were dispatched, as well as 34 helicopters. But the strong winds are not helping the situation.”

The fire was not reported as having been put out as of press time Monday. No injuries have been reported as of Monday afternoon.

The fire began at different times on Sunday in two locations located some 12 kilometers (7.5 miles) apart. The fire in Hamaeup-ri began at 3:09 p.m. Sunday in a house and spread from there to a mountain nearby where it burned through 25 hectares of forest overnight.

The fire in Hwangjo-ri began around 9:27 p.m. Sunday. Samcheok city government sent out text messages to its residents at 10:15 p.m., warning them of the fire.

Some 50 residents of the townhouses evacuated to a town hall or school gyms. The fire burned through about 10 hectares of forest, authorities said on Monday, though they have not yet determined the exact causes of the fires.

“The dry weather warning has been issued for 42 days in a row around the country,” said the Korea Forest Service. “Including the two fires in Samcheok, there have been 15 fires in the country just this weekend.”