The Netherlands continued to dominate in long-track speed skating, with Ireen Wust taking gold in the women’s 1,500-meter race at Gangneung Oval in Gangwon on Monday. 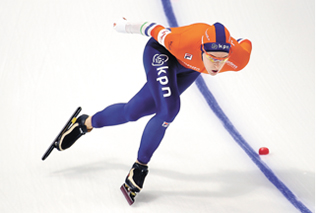 Ireen Wust of the Netherlands competes in the women’s 1,500 meter race at the Gangneung Oval in Gangwon on Monday. [YONHAP]

Wust, a five-time Olympic gold medalist, might have missed her shot at defending her title in the women’s 3,000-meter race by finishing 0.08 of a second behind teammate Carlijn Achtereekte, but she successfully redeemed herself in the 1,500-meter race.

Racing in the 11th group, Wust finished 0.20 second ahead of silver medalist Miho Takagi of Japan, who raced in the last group. 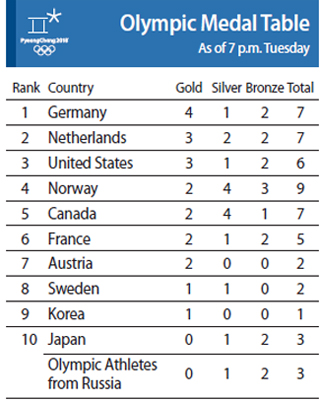 Based on the results of World Cup races this season, Takagi was the most likely to medal in the race, as she entered the Games as the top ranked skater in the 1,500-meter race, winning all four races she competed in. Wust, on the other hand, only won one World Cup race this season, and it was a race that Takagi did not compete in.

“I’m feeling really happy and I still cannot believe it,” Wust was quoted as saying on Reuters. “I had a dream to win four gold medals at each Olympics, so Torino, Vancouver, Sochi and Korea. Now, I’ve achieve that dream and it’s an incredible feeling.”

With Wust’s victory, the Dutch continue their winning streak at this year’s Olympics, taking home the gold in all three speed skating races. Though the Netherlands didn’t sweep the podium this time, they picked up two medals, as Marrit Leenstra won bronze by finishing her race in 1 minute and 55.26 seconds. Earlier on Saturday the Netherlands swept the podium in the women’s 3,000-meter race.

Nao Kodaira of Japan, the top ranked skater in the women’s 500-meter race, finished sixth with a time of 1 minute and 56.11 seconds.

Noh Seon-yeong, the only Korean skater in the race, finished 14th with 1 minute and 58.75 seconds.

“I took about a week off and competed for the first time in about two weeks so I wasn’t at my best, but I tried my best,” Noh said. “Today’s race was good training. I’ll be better in the team pursuit race.”

It was a continuous struggle for Noh to get to the Olympics, as the Korea Skating Union (KSU) misunderstood the eligibility and rules regarding athletes’ participation in the Olympics. As the International Skating Union (ISU) requires skaters that compete in the team pursuit race to qualify in at least one individual race, Noh was notified less than a month before the Wither Olympics that she wouldn’t be able to compete.

Noh was given no choice but to give up her dream of competing at the Olympics at the last minute. But luckily, once Yekaterina Shikhova and Yuliya Skokova of Russia were excluded from the final Olympic entry, Noh was given another shot at competing in her last Olympics.

The next women’s long-track speed skating event, the 1,000-meter race, will start tonight at 7 p.m.