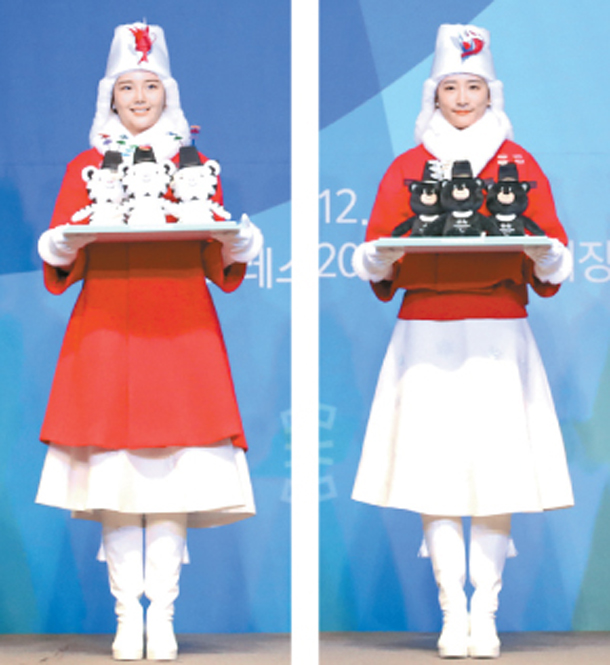 The medal-bearers and athlete escorts for award ceremonies smile in their uniforms. [YONHAP]

One of the highlights of any award ceremony is fashion. For the 2018 PyeongChang Winter Olympic Games, the uniforms for the medal-bearers and the athlete escorts have been designed with extra care, focusing on how to express Korean identity while insulating them from the winter chill.

“I wanted to show Korea’s identity,” said the designer of the uniforms, Geum Key-sook, a professor of textile arts and fashion design at Hongik University in Seoul, “and tried to bring a modern touch to our traditional wardrobe while making sure that the uniforms are warm enough for the cold weather.”

There will be 103 Olympic and 80 Paralympic award ceremonies this year, the first of which took place at the PyeongChang Olympic Plaza on Feb. 10.

Taking colors from Korea’s national flag, the women’s uniform includes a red jacket and a white skirt while the men’s is composed of either a blue jacket and white pants or a white jacket and blue pants. All sets have hints of traditional Korean clothing.

Each uniform comes with a traditional Korean winter hat that covers the ears, known as pungcha. The ornaments on the pungcha are designed by artist Oh Hwa-jin, in an attempt to add a modern touch to the traditional-looking outfit. The jacket design is inspired by durumagi, a traditional Korean overcoat, while the quilting and padding techniques have been added for insulation.