From left, one of the major displays of the ceremony featured five children on a raft gliding on a field of white buckwheat flowers. Top right, dancers perform while playing janggu, a traditional Korean drum, and below, a projection of constellations was only seen by TV viewers. [YONHAP, SCREEN CAPTURE]

The opening ceremony of the 2018 PyeongChang Winter Olympics was filled with spectacular scenes that will be long-remembered by those who watched it around the world. The use of state-of-the-art technology made quite an impression, drawing gasps of wonder and excitement from the audience. Who was behind the innovative show and how did they come up with it? JoongAng Ilbo, an affiliate of the Korea JoongAng Daily, had the chance to interview the producers who were behind the opening performance that kicked off this year’s winter Olympics.

The ceremony was a banquet of media art, largely thanks to artist Mok Jin-yo, the graphic director of the opening ceremony. Utilizing the latest technology, he is responsible for the white buckwheat flowers that filled up the stadium and the grand pillar of lights that shot up to the sky. He was in charge of producing the 2D and 3D images that were projected onto almost every surface inside the stadium. “Originally, I wanted to take some of the parts out from an artistic perspective,” said Mok. “However, we had no choice but to cover up what we lacked with projection mapping. I’m grateful that the viewers were impressed.” 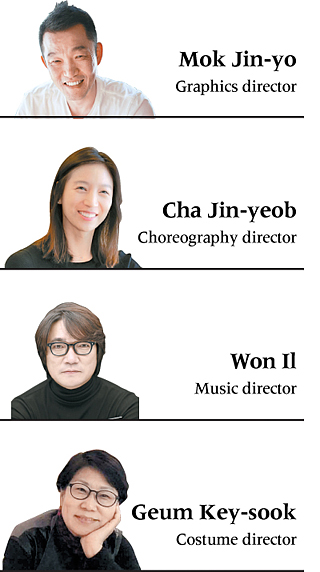 The highlight of the ceremony, according to many, was the entrance of the five children upon a raft smoothly rolling upon the field of white buckwheat flowers while the Jungsun region’s version of “Arirang” played in the stadium.

The graphics exquisitely expressed the true essence of the flowers: they were laid flat on the ground by the wind, trampled on, but they doggedly manage to get up again to bloom into simple, but beautiful flowers. “Many have chosen this scenery as the most romantic part of the show, but I’ve merely narrated our nation’s arduous modern history through the movements of the flowers,” Mok said. “The field was a 3D image made up of computer graphics.”

Who would have expected to see a 600-year-old astronomical chart projected into brilliant constellations at the opening ceremony of the Olympics? The moment when the constellations suddenly appeared in the sky, was one to remember. However, the breathtaking setting was invisible for the audience seated in the stadium. The constellations were featured through augmented reality, which is why the effect could only be seen on screen.

What Mok put the most effort in and grew the most attached to was creating the red and blue Taegeuk symbol found on the South Korean flag. Performers playing the janggu, a traditional Korean drum, finished their portion of the show by instantly changing their clothing from white to red and blue. “I wanted to show the powerful Taeguk which is not swayed or altered by outside forces.” Mok said.

The impact of the transition to the Taegeuk mark was enforced by Won Il, the music director. As the composer of the janggu concerto, he “wanted to materialize the principle of Heaven-Earth-Human into a sound, and wanted to express the most fundamental spirit of Korea in the most dynamic way.” The performance included 188 janggu players and 200 dancers. At the beginning of song, the performers all shouted, “Heaven, earth, human” in unison, ringing out throughout the entire stadium.

He had faith in the impact that janggu would make in the show. The performers were high school students from art schools and the dancers were all college students. The average age of the performers was relatively young because he wanted to “depict the most traditional sounds as brightly and cheerfully as we could.” They rented out a warehouse in Ilsan, Gyeonggi and practiced until they were perfect.

Won was not only in charge of the janggu performance, but also the national anthem, and the songs that played while each country walked into the stadium. “Since the average temperature was so low, the music had to contain excitement,” Won mentioned. “Especially when the athletes were walking in, I arranged popular K-pop songs from across the generations into a more electronic style.”

As a result, the athletes danced into the stadium, showing their excitement to those watching at home. 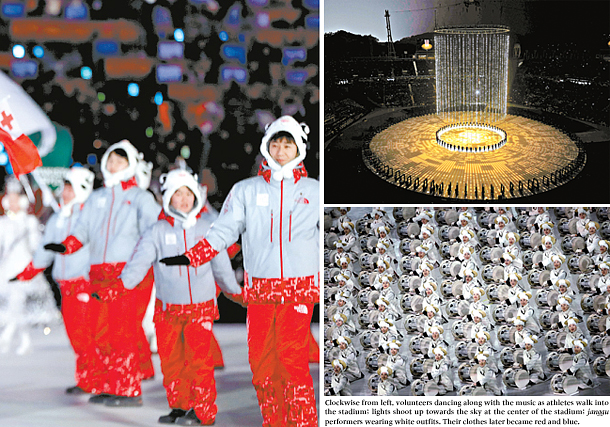 Another sight that entertained viewers were the 100 volunteers who danced along to the music for an entire hour without resting. The choreography director Cha Jin-yeob noted, “I put an emphasis on merriment. I put a lot of wide arm motions so that they would be visible from a distance.”

For modern dance choreographer Cha, the planning of the ceremony was unlike anything she has ever done beforer. She only had 10 days to teach the volunteers, who are not professional dancers. She planned out seven easy dance moves that they could be mimicked and repeated to create a complete dance routine. She figured out nicknames for each of the movement so that the dancers could easily remember each of them. The volunteers quickly picked up the moves and soon were dancing along the music.

“Although the weather was quite cold at the start of the rehearsal, the volunteers seemed to have fun,” Cha said. She has been working on the opening and closing ceremony since the fall of 2015, and she added, “If you enjoyed the opening, you can count on enjoying the closing ceremony as well.”

The costumes worn by all of those participating in the opening performance also drew praise from the crowd. In the stadium, every pair of eyes was instantly drawn to the vibrant and elegant costume of the Ungnyeo, a bear who turned into a woman from the legend of Dangun. Her attire, made from silk and gold thread, expressed the modern beauty of traditional Korean culture, and was the work of Geum Key-sook, the opening ceremony’s costume director.

From left, eight South Korean flag bearers wearing modified hanbok and pungcha walk out together. Next, a close-up of the trim of the flag holders’ skirts and their delicate decorations tremble in the wind which often blows in the Pyeongchang region. [NEWS1, AP/YONHAP, YONHAP]

Geum was in charge of the Ungnyeo, the costumes of the eight South Korean flag bearers, and flag bearers who walked in front of each nation as the athletes made their entrance. “My ultimate goal was to show off the aesthetic of our traditional attire, hanbok, while simultaneously displaying 21st century apparel that the international community can relate to.”

To achieve her purpose, Geum designed every item of clothing using three principles.

First, she used white to represent Korea, which was once known for its “white-clad folk,” and eight pastel colors as points to signify the diversity of the world. The eight flag bearer’s white coats resembled a traditional gentlemen’s robe and their colorful traditional hats known as pungcha reflected global diversity.

Secondly, she used the essence of the winter hanbok and put them into modern outfits. The banner holders’ dresses and scarves were clear illustrations of this principle. There was no doubt that their outfits were inspired by hanbok, mainly due to their collars.

“The scarves were designed to bring out the image of the hanbok’s collar, so everyone should have noticed that the modernized outfits was derived from traditional clothing.”

The third principle was inspired by the Pyeongchang region’s rough winds and adding “trembling decorations” to the costumes.

The thin bands that decorated the chests of the flag carriers and the traditional garments that hung behind their backs moved whenever the winds blew, bringing vivacity to their looks.

The flag carriers’ crown decorations and the trims of their skirts also utilized their delicacy and reflected the lights in the stadium to guide the audience into a winter wonderland.

“In traditional hanbok custom, delicate elements represent the energy of life,” Geum said. “I hope all those who watched the ceremony felt the lively energy of our country.”