Korea’s Olympics, now and then : Exhibit looks at how design has changed over the past 30 years

Korea’s Olympics, now and then : Exhibit looks at how design has changed over the past 30 years 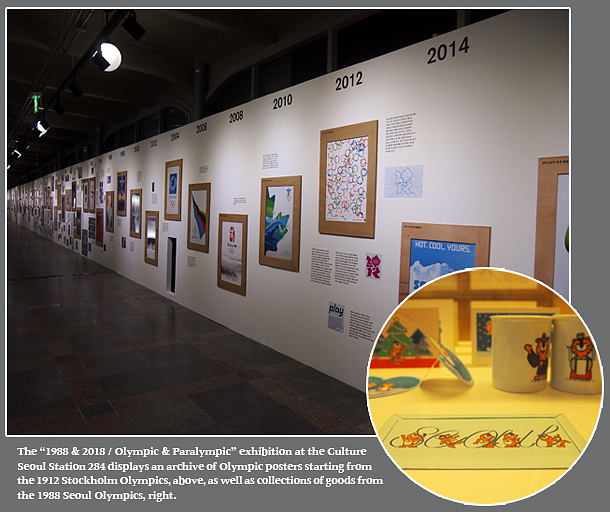 
There are many roads that lead to Pyeongchang County, Gangwon, where the air is filled with Olympic excitement. But if your trip starts at Seoul Station, be sure to stop by the Culture Station Seoul 284’s “1988 & 2018 / Olympic & Paralympic” exhibition, organized by the Korea Craft and Design Foundation (KCDF).

Held through March 18, the last day of the Paralympics, the exhibition provides a look into the artistic side of the international sports gathering, including the posters, characters, emblems and uniforms of not just the current event, but also from the 1988 Seoul Olympics.

“The Olympics isn’t just a sports event, but a sphere of conversations and harmony, where we can show the world the excellence of Korean culture,” said Choi Bong-hyun, president of KCDF, at the opening of the exhibition on Feb. 9. “This is an opportunity for everyone to see [how things have changed over the past] 30 years, from 1988 to 2018, via the two Olympics.”

The exhibition takes up two floors and is spread across seven different sections, with displays about the ongoing Olympics on the first floor and the archives from 30 years ago on the floor above. Throughout the space, works are displayed on walls that are shaped like the mountains which resemble the peaks in the Pyeongchang region.

The first section, “The Volunteer,” is a collection of interviews with volunteers from the two Olympics, all of whom differ in age, gender and reasons for participating in the event.

“What’s interesting about the videos is that we can see how times have changed through the interviews at the two different Olympic Games,” explained Jun Mi-yeon, general manager of the culture station. “During the ’88 Olympics, volunteers dedicated their time and energy as citizens representing the nation, while the young people of the PyeongChang Olympics [volunteer] for their own experience.”

The eight Olympic posters and four Paralympic posters made for PyeongChang are on display along with a vast archive of official Olympic posters starting from the 1912 Stockholm games. The collection was previously at the Museum of Modern and Contemporary Art (MMCA) at the end of 2017.

Those who do not have the chance to make it out to Pyeongchang can visit some of the Olympic venues through the exhibit’s virtual reality experience. 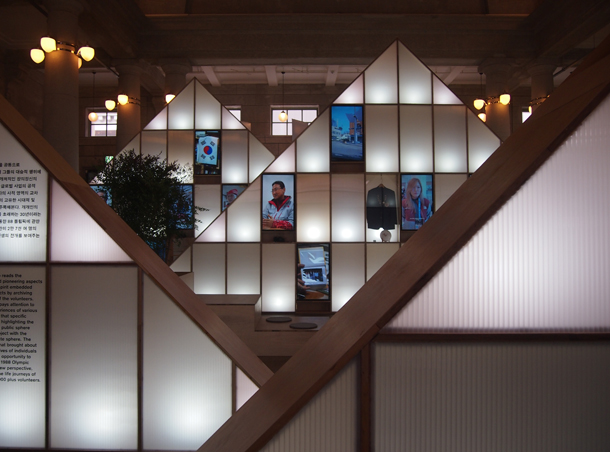 The main exhibit is displayed on walls that resemble mountains in the Gangwon region. [YOON SO-YEON]

The exhibition will hold seminars every Friday until March 16, except on Feb. 16, the Lunar New Year, on various subjects including the history and meaning of the Olympics.

A walk up to the second floor takes guests back in time to 1988, with displays that show how the Seoul Olympic mascot Hodori was created and a collection of goods from the era, including pins, posters, books, dolls, stamps and much more. In a separate room is an array of books and photos from the time period that give a visual representation of the important social issues and news of the time.

“Korea is one of the eight countries who have hosted both the Olympics and the Winter Olympics,” said Jun. “But we didn’t just want to focus on the two different years, but also on the Olympics and the Paralympics, since the latter tends to get overshadowed even though it’s just as meaningful. We wanted to include all members of society in this exhibition, including the handicapped and minorities.”