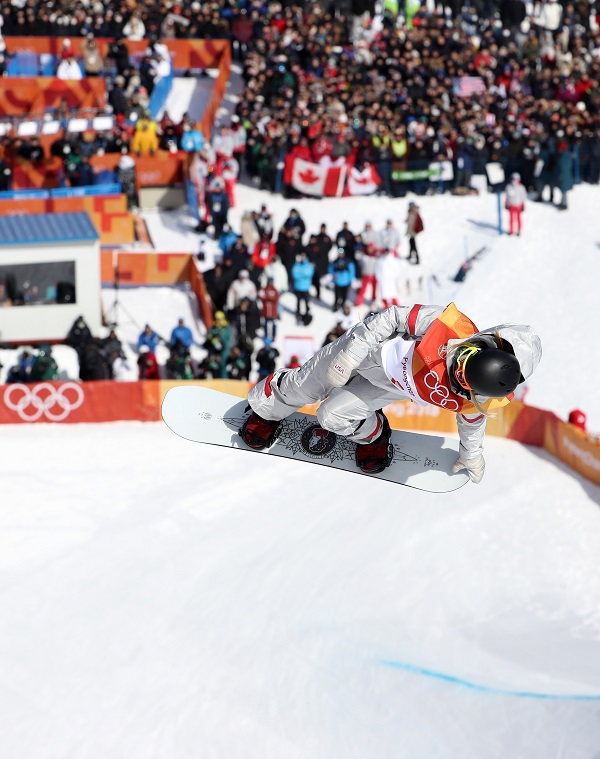 Chloe Kim of the United States competes in the women’s halfpipe final at Phoenix Snow Park in Pyeongchang, Gangwon on Tuesday. Kim received the highest score of 98.25 points to win gold at her first Olympics. [YONHAP]

Just like in the qualification runs, Kim dominated the contest, finishing nearly nine points above her closest competition and the only competitor to score over 90.

Kim came out the pipe even stronger than during the qualifications on Monday, receiving a score of 93.75 on her first run. She fell in the second run while attempting the elusive back-to-back 1080s, but remained in first place as only the best score counts toward the final medal standing in snowboard halfpipe.

Liu Jiayu of China, who received a personal best score of 89.75 points on the second run, was the only snowboarder that came close to challenging Kim, but a fall in her third run meant that Kim was guaranteed the gold medal even before she dropped into the pipe for a final time.

With her victory guaranteed, the 17 year-old set out on a victory lap, this time successfully landing back-to-back 1080s and receiving a score of 98.25. Kim was the first ever female snowboarder to successfully land back-to-back 1080s at the U.S. Snowboarding Grand Prix in 2016 — also on a victory lap. She is now also the first female snowboarder to do so at the Olympics.

“Going to my third run, I knew that I was taking home a gold, which was [a] very insane feeling that I can’t even explain right now,” Kim said. “My third run was just for me… just show myself that I can do it.”

Kim is now the youngest female snowboarder to win gold at the Olympics, exceeding the previous record set by her teammate Kelly Clark, who won gold at the 2002 Salt Lake City Winter Games at 18 years-old. Clark — competed in her fifth and final Olympics in Pyeongchang — just missed the podium, finishing fourth with 83.50 points.

In addition to winning her first Olympic gold, Kim’s victory had a lot more meaning to her, as she won in her parents’ birth country. Kim’s parents immigrated to the United States in the early 1980s.

“I think today I really did it for my family and everything they’ve done for me,” Kim said at a press conference. “I think I’m so grateful for that. When I landed and realized that I’ve won the first [gold medal], words that came into my mind were mom, dad and family.”

Kim’s father, Kim Jong-jin, has long been the biggest supporter of Kim’s career, even quitting his job to support her dream. The inspiring story of Kim and her father’s journey to the PyeongChang Olympics was aired as a “Best of U.S.” commercial during the Super Bowl on Feb. 5.

Though Kim’s family doesn’t live in Korea anymore, he said it was an emotional moment for him to watch his daughter win gold at her first Olympics in the country where he was born.

“I’ve dreamed about this,” Kim Jong-jin was quoted as saying on Yonhap. “My dream came true. American dream. Her blood is 100 percent Korean even though she was born in the U.S. and was educated in the U.S., but blood is blood. Not many people have this kind of opportunity. Everybody has your origin. So it’s very special.”

After starting snowboarding at age 4 and competing at age 6, Kim was the first female halfpipe snowboarder to receive a perfect score of 100. Despite not participating at the 2014 Sochi Olympics due to the age limit, Kim has long been considered the most likely snowboarder to win gold at PyeongChang. She has won four golds at the Winter X Games in the women’s superpipe and two golds at the 2016 Winter
Youth Olympics, both in halfpipe and slopestyle. Kim is still the only athlete in the history of the X Games to win the event three consecutive times before the age of 16.

With Kim’s victory, the United States continued their dominance in women’s halfpipe, claiming the gold for the second consecutive Olympics. Kim was joined on the podium by teammate Arielle Gold taking bronze, the fourth Olympics in a row that the United States has taken home two medals in the event.

With a score of 98.25, Kim recorded the highest score ever in Olympic snowboard halfpipe — men’s or women’s — since the current scoring system was introduced in 2014. The record only stood for a few hours, however, as Shaun White, also from the United States, recorded a huge 98.50 in the men’s qualifiers in the early afternoon.

Of the three Koreans competing in the men’s event, Lee Kwang-ki had the best result, finishing in 14th place with 75 points, but failed to qualify for the finals.