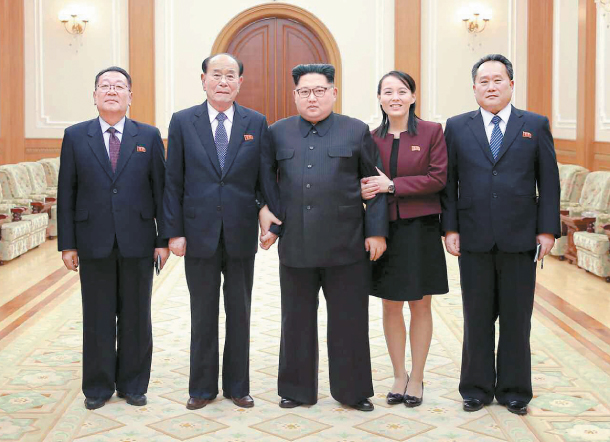 North Korean leader Kim Jong-un, center, stands Monday in Pyongyang with lead members of a high-level delegation that visited the South from Friday to Sunday to participate in the Olympics, including his younger sister Kim Yo-jong, second from right. [YONHAP]

North Korea’s state-run media said Tuesday that its leader Kim Jong-un expressed “satisfaction” over the outcome of his sister’s recent visit to the South and that he gave “important instructions” for the improvement of inter-Korean relations.

The Korean Central News Agency (KCNA) did not specify what those instructions were, but quoted Kim as stressing the importance of using the PyeongChang Winter Games as “momentum” for strengthening ties with South Korea, saying it was “important to continue making good results by further livening up the warm climate of reconciliation and dialogue created by the strong desire and common will” of both countries.

President Moon Jae-in, who sees the resumption of Pyongyang-Washington talks as imperative for inter-Korean ties to develop, reiterated the United States’ renewed stance on the North during a summit meeting with Latvian President Raimonds Vejonis on Tuesday, saying the United States has “expressed its intention” to talk with the North, according to Moon’s spokesman Kim Eui-kyeom.

The remark came shortly after the Washington Post quoted U.S. Vice President Mike Pence, who landed in South Korea last week to participate in the Olympic opening ceremony, as saying on his flight back to the United States that the Donald Trump administration was willing to sit down and talk with the regime while the pressure campaign is ongoing, calling it an approach of “maximum pressure and engagement at the same time.” This new U.S. position is a deviation from the past, when the Trump White House would only engage directly with the regime if it made real concessions for denuclearization, building maximum pressure until that point was reached.

Kim’s comments regarding the outlook of Seoul-Pyongyang ties were relayed Monday in Pyongyang during a meeting with a North Korean delegation upon its return from the South. The delegation’s trip was from Friday to Sunday. Kim’s sister, Kim Yo-jong, first vice director of the Central Committee within the Workers’ Party, and other delegates briefed the leader in detail about their interaction with South Korean officials, Seoul’s “intention” as well as the “movement of the U.S. side.”

Upon receiving the delegation’s report, Kim “expressed satisfaction” and “highly appreciated the efforts” of the members, read an English version of the KCNA article.

Kim extended his gratitude to Seoul, saying it was “very impressive” that the South Korean government made “sincere efforts” to guarantee the delegation’s convenience and that it is still doing so for the North Korean visitors who remain in the South, including cheerleaders, athletes, reporters and taekwondo performers.

A photo that ran with the KCNA article showed a smiling Kim with the four delegates, including his sister, who stood to his left with their arms affectionately interlocked.

The delegation had been led by Kim Yong-nam, president of the Presidium of the Supreme People’s Assembly, the country’s rubber-stamp legislature.

It flew from Pyongyang to Incheon International Airport last Friday afternoon on Kim Jong-un’s private plane, staying until Sunday night before taking the same plane back to the North.

Kim Yo-jong met with Moon over four different occasions throughout that time, including a meeting and lunch at the Blue House last Saturday, which lasted for three hours.

The highlight of their interaction came when she invited Moon to Pyongyang for a summit with Kim Jong-un, saying she had been tapped by her brother to serve as his special envoy in order to deliver the invitation.

Kim also expressed “satisfaction,” the KCNA said, during a separate meeting with members of North Korea’s Samjiyon Orchestra, which held two concerts in the South last week, one in Gangneung, Gangwon, and one in Seoul.

Kim said he was “pleased that the fellow countrymen in the south including President Moon Jae In and his wife expressed satisfaction over the performances while warmly responding and cheering them,” adding that the orchestra successfully conveyed the “warm mind of the people in the north who are hoping for the successful Winter Olympics and national reconciliation.”

The Samjiyon Orchestra arrived on a North Korean ferry at Mukho Port in Donghae, Gangwon, on Feb. 6, traveling back across the border on Monday by taking a road linking the two countries near the west coast.

Moon’s possible first summit with Kim will depend on the Trump administration, which is so crucial to Seoul that a senior Blue House official described it as playing the “most important role,” one that “holds the key” to the meeting.

The official, who spoke on the condition of anonymity, said Tuesday that the Blue House was “carefully waiting” for internal discussions in the White House to “ripen” over the idea of a possible resumption of dialogue between the United States and North Korea, adding that Washington’s stance on Pyongyang was “getting much closer” to that of Seoul’s because it has gone from maximum pressure to maximum pressure alongside dialogue.

South Korea’s Unification Ministry, which handles inter-Korean relations, is going all out with its own efforts to convince regional powers of the prospects of a South-North Korea summit.

Vice Unification Minister Chun Hae-sung met with Japanese Ambassador Yasumasa Nagamine at his office in central Seoul Tuesday to explain North Korea’s participation at the Olympics and brief him on the outcome of the high-level delegation’s recent visit to the South.

The ministry said in a statement that Seoul was keen to cooperate with the international community to peacefully resolve the North Korean nuclear crisis and improve South-North relations “patiently, calmly and cool-headedly.”

Chun is planning to meet with Chinese Ambassador Qiu Guohong today for a similar briefing.