Lotte chairman gets 2.5 years in jail for bribing ex-president Park

Lotte chairman gets 2.5 years in jail for bribing ex-president Park 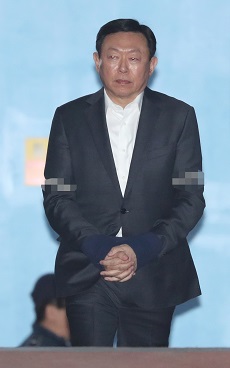 The Seoul Central District Court sentenced the 62-year-old head of the country’s fifth-largest conglomerate to two years and six months in prison for having offered 7 billion won ($6.45 million) to a nonprofit foundation controlled by Park’s friend in return for an improper business deal.

The court said there was a tacit request from Shin to Park to win a duty-free business license in return for the donation.
Shin was immediately sent to jail after the ruling was announced. The court also said it will fine Shin 7 billion won as part of the punishment.

The multinational retail giant Lotte is the second conglomerate mired in the corruption scandal revolving around Park and her friend Choi Soon-sil. Lee Jae-yong, vice chairman of Samsung Group, the country’s biggest conglomerate, was convicted by the same court for having bribed Park and Choi. He, however, was released from prison earlier this month after an appeals court reduced his jail term to a suspended sentence.

Park was removed from office in March 2017 after the Constitutional Court upheld a National Assembly impeachment. When Park was indicted in April on abuse of power and corruption charges, Shin was also indicted. Shin’s trial began the next month.

The prosecution indicted Shin for bribing Park in March 2016 by donating 7 billion won to the K-Sports Foundation to build a sports facility in return for a duty-free business license. It said the duty-free license was an important issue for Lotte at the time because it was seeking to list its hotel business to solidify his management control over the group. Duty-free stores are part of Lotte’s hotel business.

In July and November 2015, Lotte failed to renew its two duty-free licenses. In April 2016, the Park administration allowed three more conglomerates to operate duty-free stores, and Lotte regained its right to operate a store in Jamsil, southern Seoul.

Lotte Group has argued that the donation had nothing to do with the duty-free business. It argued that Choi coerced the donation from the company and no favor was involved since the money was returned.

The court said Tuesday that the donation, although it was later taken back, was still a bribe. It said it recognized the fact that Shin offered the money at Park’s demand when he was in a desperate situation, and that it would have been difficult for him to turn down the president’s request. Still, it said not all businessmen would have made the same choice.

The prosecution initially asked the court to punish Shin with a four-year prison term, but the court sentenced him to two years and six months.

Shin went through a separate corruption trial last month. He was convicted of multiple embezzlement charges but managed to avoid a jail term as a local court handed down a suspended prison sentence in December. With Tuesday’s ruling, Lotte Group will face a leadership vacuum now that Shin is jailed.