Kim Min-seok proves there is room for Korea in 1,500 meters

Kim Min-seok proves there is room for Korea in 1,500 meters 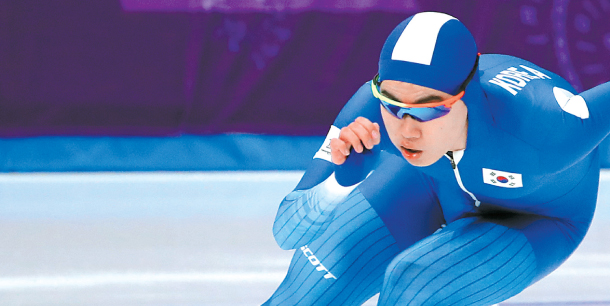 Kim Min-seok won a surprise bronze medal in speed skating, coming third in the men’s 1,500 meters at Gangneung Oval in Gangwon on Tuesday. 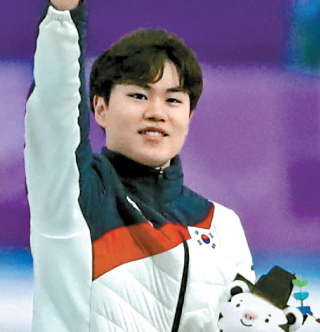 Having never medaled in the 1,500-meter race in the International Skating Union (ISU) World Cup this season, the 19-year-old’s result definitely came as a surprise. He entered the race ranked 14th in the World Cup Rankings this season. Kim’s previous best finish this season was fourth at the second World Cup race.

Racing in the 15th pair with Haralds Silovs of Latvia, Kim clocked 1 minute and 44.93 seconds, behind Kjeld Nuis and Patrick Roest of the Netherlands. Kim is the first Asian skater to ever win an Olympic medal in the men’s 1,500 meters.

Though Kim got off to a slower start than the others, clocking 23.94 seconds at the 300-meter point, he slowly sped up after the 700-meter mark.

After finishing the race, Kim had to wait for six more skaters to compete. Since higher-ranked skaters including second-ranked Koen Verweij of the Netherlands and third-ranked Joey Mantia of the United States were yet to complete their race, Kim had to wait until the end of the race to guarantee his spot on the podium. Once his third place was confirmed, Kim started running around the warm-up area in celebration.

Standing at 1.78 meters (5 feet, 10 inches), Kim is considered a dark horse in Korean men’s speed skating. During the ISU World Single Distances Speed Skating Championships at Gangneung Oval in February 2017, Kim finished fifth in the 1,500 meters, finishing in 1 minute and 46.05 seconds. At the time, Kim finished better than Mantia and Roest. Even more impressive, Kim was only 0.55 seconds behind Sven Kramer of the Netherlands, who won bronze in the race.

Though Kim isn’t a familiar name in speed skating, he had an outstanding junior career. He won gold in the 1,500-meter and mass start race at the 2016 Winter Youth Olympics in Lillehammer. Following a successful junior career, Kim left quite an impression at the 2017 Sapporo Asian Winter Games, winning gold in the 1,500-meter and team pursuit races and bronze in the men’s mass start.

Prior to the PyeongChang Olympics, Kim continued to challenge himself. In addition to his main race, the 1,500 meters, he also made an attempt to compete in the 5,000 meters. To do so, Kim lost seven kilograms (15.4 pounds) to build up his endurance and make his body lighter. Unfortunately he missed out on a spot on the roster by finishing fourth in the national team qualifying event.

Rather than being disappointed, Kim switched track to solely focus on the 1,500 meters. To be competitive in the shorter race, Kim had to pile the pounds back on, gaining four kilograms in two months. Though an abrupt change of weight can affect a skater’s race, Kim didn’t let his dieting impact him.

“It wasn’t too difficult because I slowly increased the amount of food in my diet,” Kim said.

Once Kim moved to the Gangneung Olympic Village, he kept fit by cycling every day. The hard work paid off - Kim’s bronze medal came in his Olympic debut race.

“I was nervous watching the remaining races,” Kim said. “I am honored to be the first Asian to win a medal in this race.”

With the victory, Korea has won an Olympic medal in every event except the mass start, which has been added back to the Olympics for the first time since the 1932 Winter Games in Lake Placid.