Olympic currency is an emotive keepsake

Olympic currency is an emotive keepsake 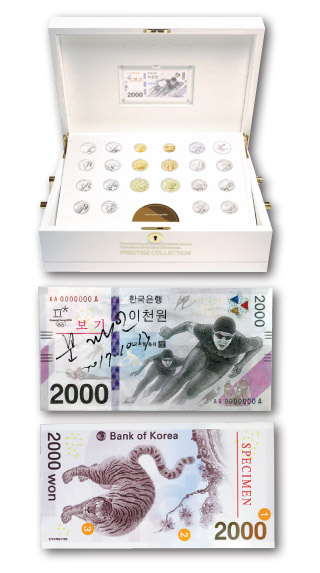 From top: a set of 22 different commemorative coins displayed with a 2,000 won note, a close-up of the 2,000 won note with President Moon Jae-in’s signature. [YONHAP, JOONGANG ILBO]

The Bank of Korea (BOK) has issued commemorative 2,000 won ($1.78) banknotes and coins for the PyeongChang Winter Olympics. It is the first time the central bank has produced banknotes to mark a specific event rather than only commemorative coins.

The banknotes proved to be immensely popular and a total of 2.3 million copies were sold in less than two weeks after it was issued last November. The front of the note features seven key winter sports events - speed skating, ski jumping, ice hockey, curling, biathlon, bobsled and luge. Among the seven sports, speed skating was chosen as the main feature for the front, as it was the first event that Korea ever competed in at the 1948 St. Moritz Winter Olympics.

The athletes depicted on the note are sporting the 2018 PyeongChang logo.

On the reverse is a picture under the title of “Tiger and Pine Tree” by renowned artist Kim Hong-do of the Joseon Dynasty (1392-1910). The two entities have traditionally been representatives of the country.

For the commemorative coins, the PyeongChang Organizing Committee for the 2018 Olympic & Paralympic Winter Games (Pocog) launched 22 different types of coins ranging from gold to bronze, worth between 1,000 and 30,000 won. The front of the coins feature different images that represent the PyeongChang Olympics, such as athletes, venues and the official mascot “Soohorang.”