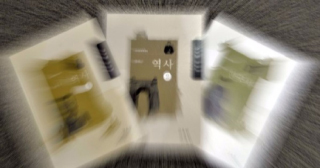 The newspaper commissioned a college admission service provider to conduct a survey of high school students, and 69 percent of respondents said, “The Korean War was a northward invasion.” The outcome was dubious, so I inquired with the company as to whether the students understood the term “northward” correctly.

I was given an unexpected explanation. The company suggested that the survey question be changed to “North Korea attacked South Korea” because “southward” and “northward” were confusing to students. But the government insisted on keeping the confusing wording.

A week after the report, the now-impeached Park Geun-hye said at the Blue House secretarial meeting, “It is a shocking result. The historical distortion must be corrected.” It was only three months after she was inaugurated. The “history textbook battle” led to consuming, partisan discord.

Five years have passed, and the textbook battle is about to resume. After the standardization was scrapped, the history textbook has changed to an approval-based system. But the standards are the issue. The proposed draft by the policy researchers commissioned by the Korea Institute of Curriculum and Evaluation states in the sections on the Korean War, “Study the background and development of the Korean War and understand the process by which division set in after the war.”

The original sentence — “The Korean War broke out by the North Korean regime’s all-out southward invasion” has simply been changed to “the Korean War.” As a result, the question of who invaded who is not explicitly stated in the textbook.

The Ministry of Education explained that they will supplement and revise the text to make it clearer.

Historical facts such as the North’s southward invasion and hereditary succession cannot be erased. The Education Ministry can put such doubts to rest by clearly stating that the textbook will sufficiently include the right content to avoid confusion among students.

What’s more important than the criteria is the textbook itself. It should be a high-quality textbook with objective, balanced and diverse perspectives. Otherwise, it could end in a suffocating quagmire of opposing views, and supporters of the state-authored textbook could argue that the Park administration attempted standardization to avoid controversy. Then, what will we have learned from the fiasco five years ago?

*The author is head of the education news team of the JoongAng Ilbo.